In the post-graffiti movement, pioneered by Jean-Michel Basquiat in 1980s New York City, street art evolved to become recognized in the fine arts world. Basquiat catalyzed a global revolution in art, music, and design, becoming a front-runner in contemporary American art, according to the Museum of Fine Arts (MFA), Boston website. His legacy is celebrated in Writing the Future: Basquiat and the Hip-Hop Generation at the MFA.

Prior to the MFA’s reopening in February, the exhibit was originally available virtually through the MFA mobile app, free of charge in October 2020. According to the app, the virtual experience only included information about the art without showing specific pieces or playing clips from the exhibit.

While the app focused on informing the viewer, the virtual exhibit lacked the immersive experience of the physical exhibit.

Within the exhibit, works by Basquiat and other artists from the “hip-hop generation” are categorized according to the themes explored in the art rather than by the artist. Sections of the exhibit include Writing the Future, Post-Graffiti, Portraiture, Writers, Big Screens, Music, Futurisms, Bodies, and Ascension.

Together they fueled the rise of hip-hop and street art, inspired by their Black, Latinx, Caribbean, immigrant, and cosmopolitan experiences, according to a plaque displayed at the exhibit.

The exhibit showcases the multifaceted span of the artistic media and techniques employed, ranging from painting, sculpture, and fashion to music and film.

“It’s interesting that the work displayed was by a community of artists,” Helene McNabb, a high school student from New Hampshire, said. “Many of them were friends and collaborated together to make meaningful art.”

Basquiat’s mixed-media paintings, often incorporating a combination of acrylic, oil stick, and pencil on canvas, are the focal points of the exhibit. He is best known as a neo-expressionist and a trailblazer of the post-graffiti movement, embodying the spirit of emerging art in 1980s NYC, according to the MFA website.

“Basquiat’s art is simply beautiful to look at,” Rebecca Cheney, an attendee from Harvard, Mass., said. “His pieces have a wealth of creativity.”

“You come here, and you see something like [Basquiat’s “Famous Moon King”], and you see how bold he was, the risks he took, and how super creative he was,” Calabrese said. “To make something of such a scale, you have to be fearless.”

The exhibit signals at and explores the themes of criminal justice and racial discrimination. One of the featured works, “Flashlight Text Survival” (1983-1984) by A-One and Jenny Holzer, alludes to police brutality and perseverance. The phrase “when someone beats you with a flashlight, you make light shine in all directions” is in the center of the painting in black, bold capital letters, and a man of color’s solemn expression is also portrayed in the midst of spontaneous, colorful streaks of spray paint on the canvas.

“I didn’t hear too much about police brutality in the 1980s,” McNabb said. “Modern events brought it to the forefront of the media, so it is interesting to see how social injustice has been a constant theme in art.”

The exhibit captures the bold art of the emergent hip-hop movement, which Basquiat and his peers helped to pioneer. Writing the Future: Basquiat and the Hip-Hop Generation will be on display at the MFA Boston through May 16 at the Ann and Graham Gund Gallery.

“It is a high time to have more exhibits of this nature,” Cheney said.

Featured Image by Molly Bankert / for The Heights 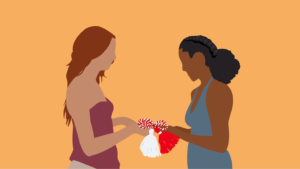 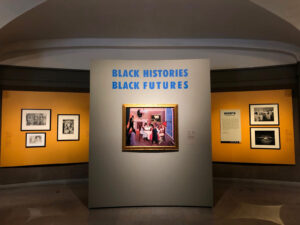