The O’Neill Quad was transformed into a lively amphitheater on Friday at the Boston College Arts Festival, as five student bands participated in the annual Battle of the Bands competition.

Indie-rock band Photo Negative kicked off the night. Lead singers and guitarists Matthew Hogan, CSOM ’22, and Benjamin Crandall, CSOM ’23, were joined by Nicholas Straub, MCAS ’23, on bass; Éamon Laughlin, MCAS ’22, on drums; and Stephen Ventura, CSOM ’22, on the saxophone. The band played mostly songs off its EP, A Great Big Hole in the Wall, which is available on all streaming platforms. The band ended with its original song “Whatever Floats Your Boat”—a clear crowd favorite as audience members joined in, singing along from their seats.

Cherry Dawn Planet was next to take the stage. The four-person band, composed of Lily Hafez, MCAS ’22; Stella Si, MCAS ’23; Calvin Czapko, MCAS ’24; and Madeline Dunlay, MCAS ’24, performed original songs that offered vivid critiques of contemporary society, such as “Corporate Cause” and “Institution.” Hafez was on drums, Si was on keyboard, Dunlay was on bass, and Czapko played guitar.

Cherry Dawn Planet was followed by Battery Man, a two-man band with a distinct jazz sound. The duo was a solely instrumental group, but its keyboardist was such a wizard on the keys that the lack of vocals did not detract from the performance.

Another two-man band, thefineprint., followed and was led by Caleb Savari, CSOM ’21, and Vladimir Vezikov, CEO and co-founder of Tulugy, an app that connects customers to home repair services. Playing from its 2019 album, Kites and Body Bags, the band showcased its robust sound. The band ended its performance with its song “One Song,” a heavy-handed guitar piece.

Following this performance, the band Uncommonwealth, composed mostly of BC freshmen, took to the stage. Even though it is a relatively new band on the scene, Benjamin Austen, MCAS ’24; Thomas Lynn, CSOM ’24; Cole Dumas, MCAS ’24; Spencer Bono, MCAS ’23; Michael Vaquero, MCAS ’24; and AJ Morgan, MCAS ’24, played like they had been jamming together for years, and they already have a very enthusiastic fanbase that cheered them on Friday night. Most notable was the group’s performance of its original song “Phoenix from Mars,” its newest single that was recently released on streaming platforms in March.

Hogan, the lead singer from Photo Negative, was the emcee of the night. Hogan is also the president of the Music Guild at Boston College, which hosts the Battle of the Bands competition in conjunction with the Campus Activities Board and the BC Arts Council. The mission of the club, Hogan said, is to give musicians on campus a place to meet other musicians and to give those musicians platforms to perform. He said he met all of his bandmates through the guild.

He said he felt very fortunate to have had the opportunity to perform a live, in-person concert, despite the COVID-19 pandemic this year.

“When virtually everything else has been closed, I feel like music has been one thing we can all come to—we can come to these events and we can still have that same music community,” Hogan said.

After brief deliberation, the judges announced that Photo Negative, thefineprint., and Uncommonwealth would be moving on to perform at BC’s Best the following day. Music has the tremendous power to bring people together, and that’s exactly what it did on the O’Neill Quad on Friday. 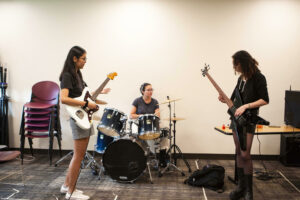 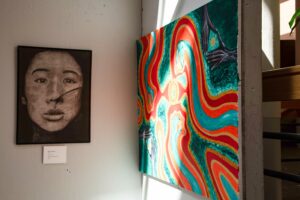