During the three days of the Boston College Arts Festival, students cutting through the lobby of Robsham Theater to grab a bite at Lower would have come across an expansive multimedia display of student art. The Arts Walk, an exhibit of BC students’ visual artworks, occupied the halls and walls of Robsham Theater, Maloney Hall, Devlin Hall, O’Neill Library, and Carney Hall from Thursday to Saturday. Roughly 70 pieces of art were on display throughout the buildings. For those who couldn’t attend the exhibit in person, the artwork is all available on the Arts Fest website.

Gray, wooden display boards were erected in the lobby of Robsham to exhibit students’ work. A diverse array of photography, oil and acrylic paintings, sketches, sculpture, and poetry were displayed on the walls. Large-scale oil paintings–including “My Friend like Frida” and “Tears of” by Megan Stephenson, MCAS ’21–were surrounded by smaller pieces and tables holding a colorful assortment of sculptures.

The lobby of the Division of Student Affairs office on the fourth floor of Maloney was filled with photographs of scenes from campus that were submitted by the office’s social media fellows. On the fourth floor of Devlin, which houses the art, art history, and film departments, the walls were adorned with a conglomeration of student art. Another stop on the Arts Walk was the Boston College Arts Council’s gallery in Carney 203, teemed with colorful paintings and sculptures.

Needing to adhere to COVID-19 social distancing guidelines, the Arts Council decided to spread the Arts Walk through multiple buildings on campus. Yifan Wang, the Arts Fest visual arts coordinator and MCAS ’22, said she sees the event as not only a practical use of space, but also as an opportunity to share art beyond the halls of BC’s art department—exposing the BC community to even more of the creative work done by its peers.

“We want to move [the visual arts] out of their little bubble and spread them out and have people walk around on campus,” Wang said. “And, you know, just meet people and bump into different people.”

Alongside some of the works were QR codes that visitors could scan to access video recordings and podcasts that Wang conducted with the student artists whose work was featured on the walk. In one episode, Zeke Coleman, MCAS ’23, talked with Wang about his desire to explore different forms of identity through his work.

His poetry and photographic portraits, a series titled What Color Am I?, are on display in the lobby of Robsham Theater. This series features a somber Black man and is meant to examine the burden of having to either conform or resist the stereotypes forced on Black people by society, Coleman explained in his video interview.

In her interviews with the artists, Wang noticed that other students were also using their art to confront the challenges and tragedies of the past year—such as the pandemic, the Black Lives Matter movement, and the recent instances of violence against Asian Americans.

“Many of them [are] saying that art helps them to reflect on themselves and also on the world that they’re currently [living] in and the situation around them,” Wang said.

Chloe Zhou, Lynch ’21, channeled her emotional reaction to the murder of eight Asian American women by a gunman in Atlanta, Ga., creating an acrylic painting entitled “Anguish” as a tribute to the victims. Her painting hung on the white walls of Gallery 203 in Carney, depicting a nude woman with her face distorted in distress. Eight arms, which are meant to represent each of the victims, emerge from her body, stretching across the bright yellow canvas.

A virtual artist panel was also held to give students the opportunity to speak about the inspiration behind their pieces and their creative process.

The catharsis that many of the artworks provide was not only available to the artist, but also to the students that wandered through the exhibit, Wang said. Students were able to observe the artists’ reflections on the events of the past year and consider their own experiences.

“It is also a good way to have some new perspective and new voice in life and on campus to [see] something new,” Wang said. “And people are really looking for the opportunity to meet new people and have a chance to reunite. And I think art, especially, [provides] this space where people can have conversation with their friends talking about art.” 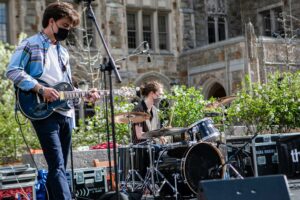 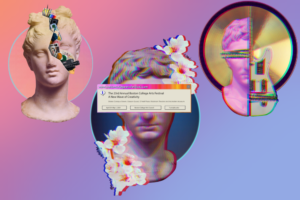