These were the questions that Daniel Brett and Robert Harrington, both BC ’18, found themselves asking as they observed how the pandemic was redefining preconceived notions of what it means to be a remote worker. Brett and Harrington were not alone when their jobs moved from in person to remote—all of their friends shared the same fate.

As the pandemic wore on, navigating the new normal of working from home sparked an idea for Brett and Harrington—they started renting properties with their friends through Vrbo and Airbnb for four to eight weeks at a time. This would allow them to live and work together in locations away from home—essentially, they organized a group “workcation.” These trips became the inspiration for the creation of their company, Dryfter.

“Dryfter, as succinctly as possible, is a dedicated housing platform for remote workers,” Brett said. “People are going to want to spend extended periods of time in cool and interesting geographies across the U.S., and they want to make sure that wherever they are, whatever property they’re at, regardless of the size of the group, it’s well equipped for working from home.”

The now-cofounders of Dryfter met during their sophomore year at Boston College when Harrington transferred into BC and was placed in Brett’s room in Vanderslice Hall. But starting a business together hadn’t always been the end goal, they said. After graduation, Brett, a computer science major, went on to work for a computer software company, while Harrington, an economics major, entered the financial services industry. 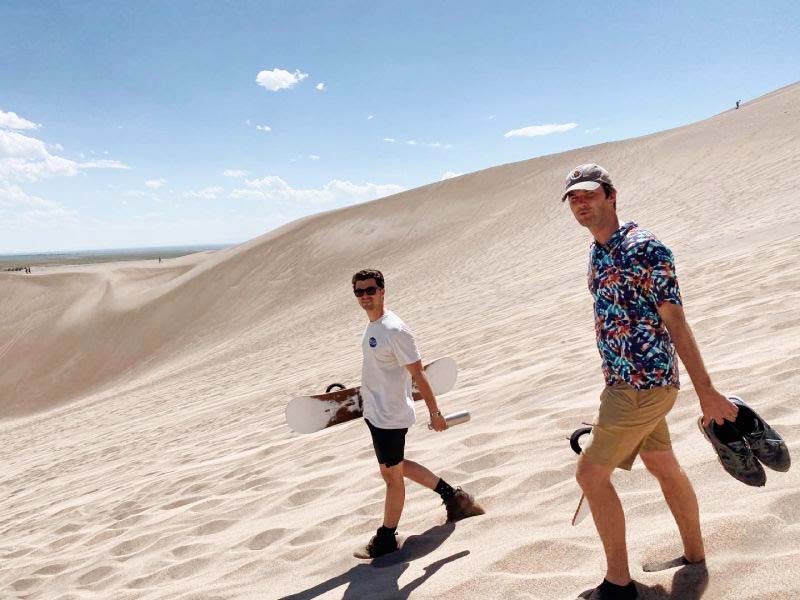 It wasn’t until COVID-19 forced both out of the office that the pair pivoted their careers to begin developing Dryfter.

After experiencing “workcations” themselves through renting Vrbo and Airbnb properties, Brett and Harrington saw the opportunity to design properties tailored to a remote worker, rather than just a traveler. Ensuring that their properties are properly configured for remote workers is a key part of Dryfter’s value proposition, they said. Harrington and Brett make sure that their properties have a dedicated co-working space, private offices for calls, quality monitors, and a strong internet connection.

“Our whole goal is, regardless of what property you’re at in the Dryfter network … and regardless of the size of the group that you’re with, [is that] you’re going to have a pleasant working-from home-experience,” Brett said.

Dryfter is targeted toward individuals that Brett and Harrington refer to as “Dryfters” or digital nomads—workers that have no strong geographical ties and therefore can travel to wherever they want to work from. Niche categories of workers, such as freelancers or entrepreneurs, certainly fit these definitions before COVID-19, but the pandemic has expanded the breadth of the digital nomad community, especially for professions in the technology field, Harrington said.

So far, there are two Dryfter properties—one in Austin, Texas and one in Boulder, Colo.—but more are in the works. When brainstorming cities for their properties, Brett and Harrington said that they don’t look to tier-one metropolitan areas, but rather cities that are located near popular recreational activities. For example, a Dryfter who is interested in skiing could work from the Boulder house and have access to the area’s skiing locations.

“So far, we’ve had some really, really interesting guests,” Harrington said. “We have a group of New Zealand entrepreneurs that are living in our Boulder house currently and launching their U.S. operations as well as … Tesla workers in Austin that came down to do some onsite work.”

Although neither co-founder was directly involved with the entrepreneurship community while they were students at BC, Harrington mentioned that he was able to take classes outside of his major that sparked his interest in entrepreneurship. One of those courses was Entrepreneurial Management in the Carroll School of Management.

“I thought it was really cool to … learn everything that goes into setting up a business,” Harrington said. “ I think that’s kind of what really sparked my interest in this world.”

“Recently with the Boston College community, [we’ve] seen a much stronger network …  as it relates to entrepreneurship and startups and starting businesses,” Brett said. “So I think that’s been really encouraging to see and kind of cool that … there are some exciting platforms and programs coming from the Boston College alumni and community.”

Brett and Harrington originally went through the SSC Venture Partners program with another idea that involved working with local restaurants to create meal kits to sell to local residents. They pivoted to creating Dryfter at the start of 2021 when they realized how valuable a targeted housing platform would be for the growing digital nomad community.

Although Brett and Harrington didn’t go through the SSC Venture Partners program with Dryfter in mind, the access the pair had to valuable connections, resources, and crucial mentors from the program later helped Dryfter get its footing, they said. Justin Robinson, BC ’11 and co-founder of Drizly, an alcohol delivery service which was recently acquired by Uber, has acted as a key mentor for Brett and Harrington since they started Dryfter in June of 2020, they said.

Through Robinson, the co-founders connected with Rich Kim, BC ’15, who invests in early stage companies like Dryfter and has been a key mentor, investor, and adviser to Brett and Harrington. Kim personally connected with the mission of Dryfter, he said, since he also rented out properties with his friends to work remotely and saw firsthand that more could be done to cater properties to remote workers.

“The homes on Airbnb were more so designed for people to come visit and live—not necessarily work from home,” Kim said. 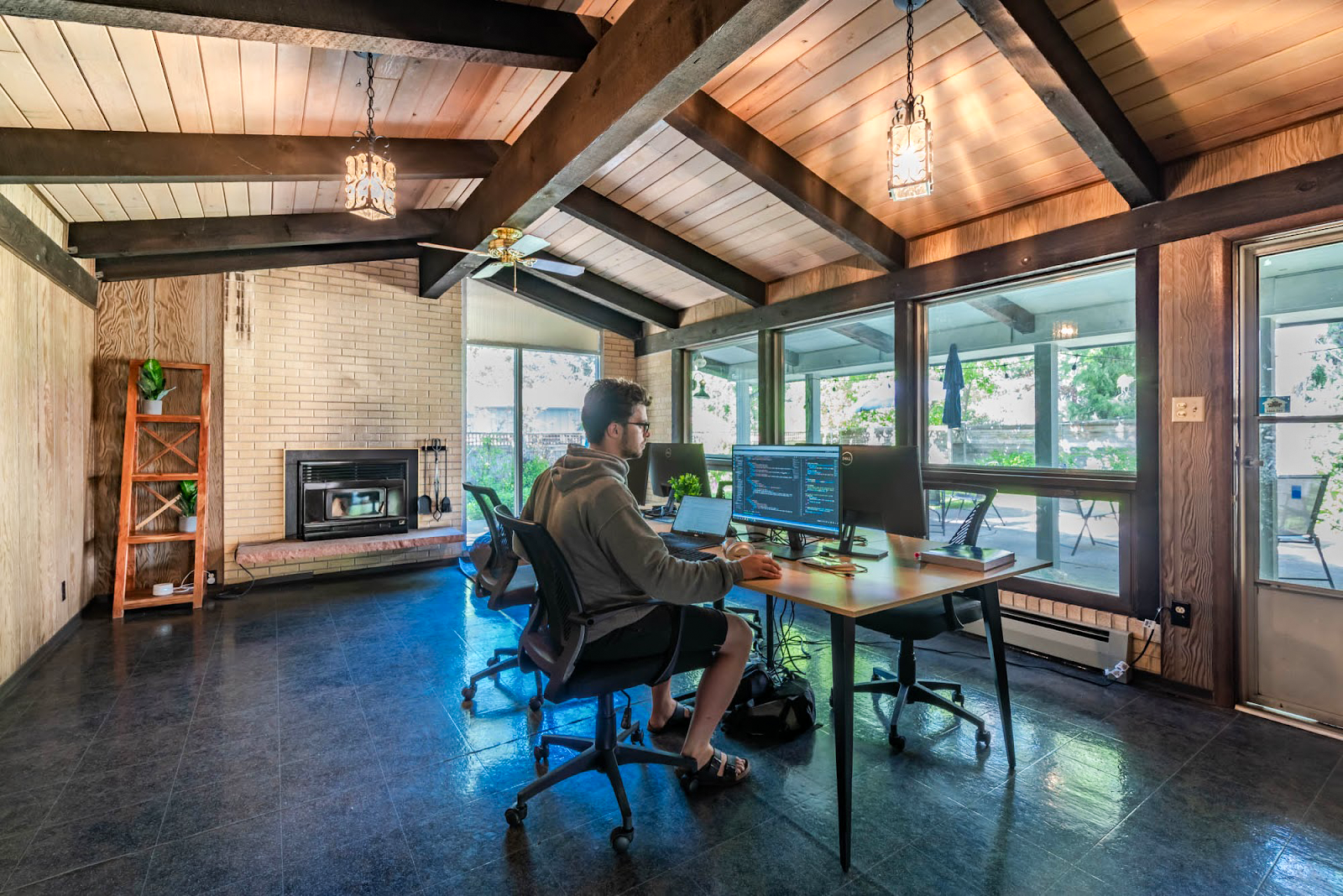 Kim said that he believes that Dryfter’s value will likely extend past the pandemic, since COVID-19 has  altered the way companies think about remote work.

“COVID really did force the world to adopt technology and try new things,” Kim said. “What we found is that … in a lot of professions, you don’t have to be in [the office] five days a week.”

Another recent condition that Kim cited in explaining the trend toward remote work is the current labor shortage. Many technology companies are currently competing to hire workers with coding and engineering skills, putting these types of workers in high demand, he said.

“Some of these different big tech companies … are now all fighting to get these different engineers,” Kim said. “Part of what the offering is to attract talent is to provide people with a fully flexible remote work schedule.”

Therefore, Dryfter is not a solution to a merely temporary problem—the way that office employees work has been fundamentally altered. By picking up on the new demands created by these shifts and not hesitating to test the waters, Brett and Harrington have created a unique service for the modern remote worker.

“Starting in any capacity that you can, is super useful,” Harrington said. “If you have an idea and you think you’re filling a market, just throwing out a survey to 100 people and seeing what the results are—starting and putting something out there in any capacity—really gets the ball rolling. Just jump in.”

Dryfter is just getting started, but the lessons learned for both co-founders have already been immense, the pair said. Through the last year of growing their idea, the importance of tenacity has shown itself again and again—although your vision might not always pan out, you can never be certain until you try.

“There’s a lot of … romanticization of starting a startup,” Brett said. “It’s just very important that you maintain … a steady demeanor and approach as you’re going through these things, because one day, you’re on top of the world, and the next day, it’s all coming crashing down.”

Homemade on the Heights: Baked Brie With Raspberry Jam
Newton Home Prices Boom Amid the Pandemic