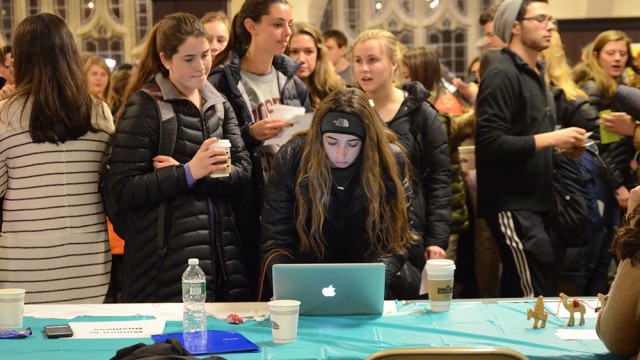 The Rat was full of frenzied freshmen, shuffling through herds of people to find what the Spring Involvement Fair had to offer Tuesday afternoon. This year’s event, which is hosted annually by the Undergraduate Government of Boston College (UGBC), featured several new entrants. In can you missed their tables in Tuesday’s chaos, here are a few clubs new to the fair:

The Other Americas is a monthly newsletter on Latin American affairs, for the last four years publishing stories involving politics, social justice, and culture, according to publication staff member Miguel Salazar. In addition to printing a monthly newsletter, The Other Americas plans to produce at least one magazine issue per semester. The group also meets on a weekly basis to discuss featured topics aimed at increasing awareness of issues affecting Latin America.  Salazar noted a lack of knowledge as well as interest in the problems of Latin America on the Boston College campus. “Culture clubs are very important, but they can deter students from joining that don’t personally identify with that culture but who want to learn more about it,” said Salazar in an email. “The Other Americas stems from that idea, and over the years we’ve had members from all backgrounds and cultures that just want to learn more.”

The Chemistry Club is a student affiliate of the American Chemical Society. “It is designed to be a place for those students interested in chemistry to gather and bond in a more casual, non-academic setting,” said Aran Hubbell, the group’s president via email. “It is a place to interact with other chemists across grade levels and pass on shared experiences.” Although the first Chemistry Club on campus was established in 1926, it has been inactive for almost a decade. Because all of the other natural sciences have active representative clubs, Hubbell and his peers believed it was time to reestablish the society. The Chemistry Club has many things planned for the upcoming semester, including a science resume workshop, a seminar on applying to internships and graduate school, a speaker from industry, and a Bill Nye movie night.

Another newcomer to the fair, the Sales and Business Development Club focuses on helping students develop the skill of selling, according to president and co-founder Chris Alto. “On Linkedin, the second most common job for a BC alum is sales, and with so many students possessing the idea of a ‘used car salesman,’ we thought it was about time to shed a positive light on the skill and profession,” said Alto in an email email.

Vice president and co-founder John Ippolito stressed the importance of firsthand experience in entering the sales profession. “The club is a necessary addition to BC in order to change this negative perception of sales and provide students with hands on experiences that will better prepare them for professional endeavors,” said Ippolito in an email. This upcoming semester, the club plans to host several interactive panels, as well as visiting speaker, Kent Summers, who is known internationally for his “Sales in Startups Bootcamp.”

The Retro Gaming Club of BC

The fourth and final, new addition to the University’s campus is the Retro Gaming Club of BC. The club, previously called the Smash Club, was initially one that “invited people who were all interested in the Super Smash Brothers video game series,” according to president Ryan Romanos. He commented via email that in a college environment as “preppy” as that of BC, the creation of the club would foster “a much more friendly environment towards video games and other dorky stuff.” The club also hopes to help remove stereotypes about gamers in general. “We aren’t a group of people who live in their mother’s basements playing games all day!” Romanos said via email. “Gamers are socially adjusted members of society as well, and I feel like that’s something that our club reminds the general public.” The club has both casual and competitive tournaments and competes against students of other colleges in the region.

activities fair
A Journey Through The Philippines In ‘Discovering Kapwa’ Photo Exhibit
A Tale Of Terror In Two Cities: Life Amid Crisis In Boston And Paris