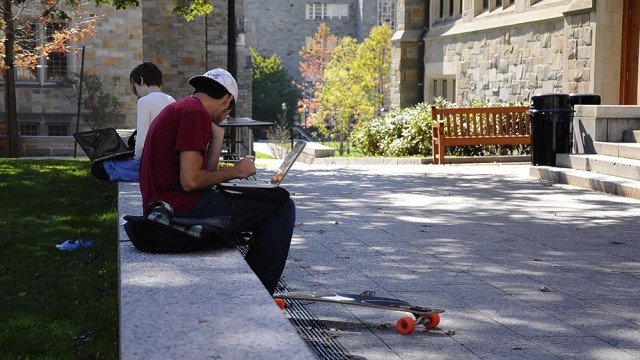 As I wander around campus on any given night, I go through a mental checklist of the things I had to do that day. Studying? Check. Homework? Check. Watching an episode of Game of Thrones on my quest of catching up for the season five premiere in April? Check. So, what should I do? Surely on this vast campus some event has to be taking place, a concert perhaps or even a lecture. Nothing immediately comes to mind, so I pull out my phone to try to find that one thing that peaks my interest, but where do I look?

This community relies heavily on word of mouth and a barrage of emails to promote campus activities—it is not uncommon for me to walk out of a class and find my inbox flooded with 27 emails from the last hour alone. Being the OCD person that I am about having too many unread emails, I go and open every single one of them to once more have a clean inbox and rid myself of the monstrous reality that it was—but I digress.

It becomes increasingly frustrating to lose the opportunity to attend events that line up with my interests simply because they did not receive enough coverage or were left out of the weekly campus activities email. Over the past few weeks alone I have missed out on several, such as the “Latin Social” hosted by Organization of Latin American Affairs (OLAA) and the presentation given by former United States Ambassador to the Kingdom of Saudi Arabia Ford Fraker. Had I known they existed, I would have, at the very least, considered whether to go or not.

Many colleges and universities have some sort of system that allows students to learn about what is happening on campus at any given hour—even that university down Commonwealth Ave. has a mobile application. It is as simple as going on the app, indicating the date and time, and Eureka! A full lineup of possibilities appears at your fingertips, no more “Fear of Missing Out” (FOMO) or day-after regrets after learning of yet another missed opportunity.

Other students have expressed to me the same desire for an increased connectivity to on-going campus events. Most agree that having a database with every event would ease the burden on both the organizers and those interested, as not only would events potentially receive larger crowds, but students and faculty alike would find themselves involved in experiences that could spark new interests or feed existing ones.

I am a member of BC Model United Nations, and our organization recently held a speakers panel discussing the relevant issues in the Middle East and their impact on both their society and ours. Immediately, we had difficulties spreading the word to the campus community, as a single event database that is embraced and constantly monitored by the population of the University currently does not exist. The event went on smoothly and was a success, but I cannot stop and think of the possibilities had there been an efficient communication pathway in place.

More can still be done, however, as it too could use increased exposure into the daily lives of students. I speak from experience that there are some nights during the week that I wish I could easily find something to do to break up my daily routine and do something different, something that I can look back upon and find a fulfilling memory. But, often I find myself binge-watching a show. “A whole 12-episode season in one night? Sure!” Do not get me wrong, Netflix is a great power but it comes with great responsibility. Maybe one day those day-long, unproductive but immensely necessary binges will come out of choice and not boredom.