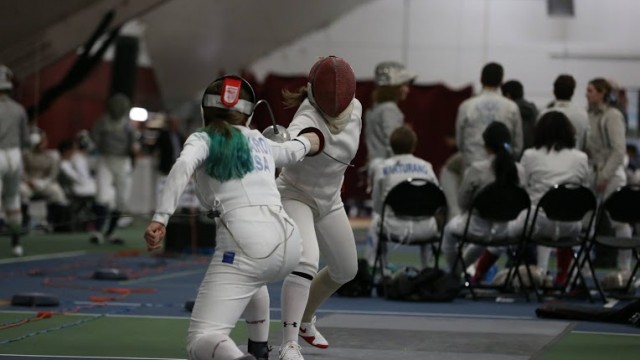 Fencer Renee Bichette Has Made a Name for Herself at BC

When you think of Orlando, Fla., you may think of warm temperatures, palm trees, and Disney World.

Fencing might not be the first thing that comes to mind.

Boston College junior Renee Bichette didn’t first think of fencing, either. The only reason she got into the sport was because of her mom, who worked out at the ESPN Wide World of Sports, a sports and recreational complex located in Disney World, and noticed a fencing tournament there. Her mom thought Bichette would be interested—and like moms usually are, she was right.

Fencing, however, isn’t very popular or widely known in Florida. Its popularity lies abroad and in metropolitan areas like New York and Texas. People don’t get drawn into it because of local interest, but rather because of random piques. In a place like Orlando, most kids start fencing because they watch a movie with sword-fighting, like Pirates of the Caribbean, and their moms search for fencing programs nearby. Fencing in Florida is nothing like your standard Little League baseball or football camps, and there are no high school teams to play on. Bichette’s coach runs a private club, at which she was the only girl.

What drew her to fencing as a 7-year-old wasn’t a movie, but the individual nature of the sport. Fencing consists of matches between two people, called bouts, so unless you are in a team event where all bout scores are compiled for a total result, you’re on your own. And part of the reason that she didn’t develop a liking for team sports was because people only ever picked their friends for teams.

“It’s who’s the most popular kid on the team, and that’s who we’re going to give the most time to,” Bichette said. “ And I didn’t really appreciate that, so with fencing, I could still be an athlete but rely a lot on my own ability.”

But even though Bichette picked up fencing instead of basketball, a sport she never took a liking to, the preteen angst and cattiness of others caught up to her.

At school, Bichette says she would get made fun of all the time because of fencing. She doesn’t like boasting about her accomplishments, partially because of the kids that didn’t understand the sport. But she ended up all the better—she recently placed seventh at the NCAA Fencing Championships and received All-American honors for her talents, the first woman at BC to do so. How many people can say that they’re in the top eight in the country for what they do? Not many.

Bichette gets why people don’t see fencing as a sport. She gets why the white uniforms and masks look silly, and why the seemingly random yelling and strange referee calls are confusing. Competing pairs stand on a thin strip of carpet while pointing sword-like weapons at each other.

But there’s so much more to it than meets the eye. Walking into a fencing bout is like walking into battle. You need to think about your physical endurance, but you also are thinking about the best strategy you can use in order to make sure the tip of your blade touches your opponent in the quickest, most efficient way possible. You’re also considering what your opponent’s strategy may be as well—what are your weaknesses? All of these thoughts are bundled up into about three minutes for one bout, and you need to have multiple touches to win.

The general gist of the rules of fencing is that competitors work to touch the blade part of their non-dangerous weapon onto part of the other competitor’s body. The vests fencers wear contain a cord that will conduct electricity when a hit by a blade is registered, and this will turn a light on. A valid touch, one that will lead to a point, is called a touche. Whichever fencer gets the most touches wins the bout—usually five to win. It may seem simple enough, but Bichette challenges anyone who dares to watch.

“If you’re watching and you have no idea what’s going on, it really seems like it’s very easy,” Bichette said. “Try it and see how you feel after fencing for two hours.”

There are three different weapons—epee, foil, and sabre. Each weapon has its own characteristics and set of rules, like which part of the blade can touch which part of the opponent, and which competitor has right of way. For example, Bichette fences epee, which has a spring-loaded tip that can hit any part of the opponent. In addition to athleticism, quick thinking and patience are required for fencing. Epee, however, doesn’t have right-of-way rules. With right-of-way rules, if two fencers make a hit at the same time, only the person who acted on offense first receives a point. Or if a fencer makes a hit but violates right of way, that fencer would not receive a touche and a point. Therefore, a foil or sabre fencer could receive touches based singularly on right of way. An epeeist can’t, and when losing a bout they must think very strategically to get touches without giving them up.

At 5-foot-2, Bichette is short for a female epeeist. Most are around 5-foot-6 or 5-foot-7, so Bichette has had to adapt her play for her height. She opts to play more defensively, planning around the bout so she can get her opponent to try to attack her so she can take advantage of the opponent’s vulnerability by getting the first touche.

Epee was chosen out of necessity—that’s all Bichette’s longtime coach from Florida teaches. In contrast, her coaches at BC, Fadner and Brendan Doris-Pierce, coach foil and sabre, respectively. Having coaches who specialize in different weapons is the result of having three distinct styles with different sets of rules. Although the two don’t teach epee, Fadner and Doris-Pierce provide Bichette with support and help her with mental concentration during a bout. Due to the technical differences between weapons, Bichette’s coaches may not always be able to give Bichette specific technical advice, but Bichette regards the emotional support and mental coaching just as highly.

New coaching was not the big adjustment when Bichette moved into collegiate fencing. After fencing for 11 years individually—there were never any other girls to form a team with at her club—she finally was part of a team. Bichette admitted the transition was a big adjustment, but pointed out that the largest part of it was changing her mindset and realizing most of her fencing efforts influenced the team. Sometimes it’s difficult for Bichette to get into the right fencing mentality. Last year in her first NCAA championship, she placed 21st. She admits that she got caught up in the bouts she lost, and wasn’t thinking in the moment. This year, she attributes her improvement to focusing on taking one step at a time and staying positive to be there for her teammates. And it worked. Despite a busy year in which she changed her major to nursing her sophomore year and began working at Hillside, Bichette managed to jump 14 spots to seventh, and was named to the All-American team. Fadner praised Bichette’s growth and approach to the mental aspect of fencing.

“It’s just really wonderful to see her able to now have the same passion and drive coupled with control and mental toughness, and weave those two together,” Fadner said. “It’s remarkable what she’s accomplished.”

Among the Eagles, Bichette has found a family. Besides her placement at the NCAA championship, Bichette says that her favorite memory from this season is when the team realized they had won the New England Championships before the results were officially announced. In a team competition, multiple bouts for each weapon fence at the same time, and individual results are compiled into a team score. There’s no scoreboard or any indication of what exactly the score is. You don’t know the team standings until everyone is done. The most you can do is some mental math to calculate where you are and hope that you are correct.

The final result keeps you on the edge of your seat until the very end. In the New England Championships, the BC team didn’t want to jinx its placement by saying anything—what if by some fluke the Eagles didn’t win? When the results were finally announced, there was a collective uproar. For Bichette, it was an unforgettable moment.

Nevertheless, Bichette’s individual accomplishments stand tall. She qualified for the NCAA Championships all on her own, and worked for her placement by herself. She fenced a total of 23 bouts—15 on the first day and eight on the second—against the top collegiate epee fencers in the country. Fencing over the course of two days is a different format than most one-day meets, and it can make or break a fencer. Competitors must keep control of their physical and mental fatigue over those two days. Bichette came out of those days triumphant. Olivia Curry, a former fencer and BC ’13, worked as a volunteer coach Bichette’s freshman year and commended her passion and drive.

“Renee is a fighter and she always has been, both in athletics and in life,” Curry said. “She’s overcome a lot and I’m so impressed and proud of her.”

When Bichette steps onto the strip, it’s just her. She is full of concentration and determination. And for a moment, every obstacle from her humble fencing upbringing fades away. The bout, the target, and the touche are all that matter.