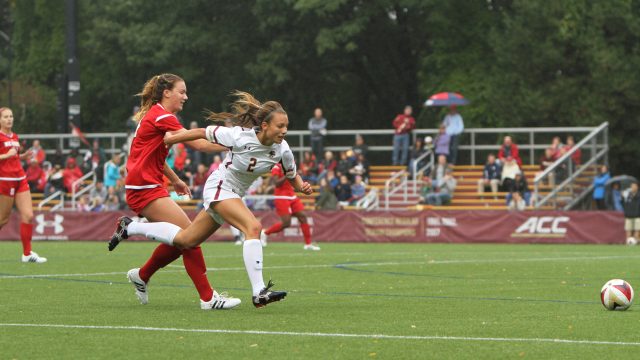 Boston College women’s soccer was coming off of a tough stretch after losing two of its previous three games. BC was looking to establish momentum with an emphatic victory over North Carolina State. But on a drizzly Sunday afternoon in Newton, the Wolfpack scored early and then stifled the Eagles for the remainder of the game, finishing with a 1-0 victory. The game was characterized by aggression from NC State (9-3-0, 3-1 Atlantic Coast) and determination from BC (9-3-1, 1-3).

The first few minutes of the game saw possession from both teams. The Eagles managed to get a shot off first—Gaby Carreiro tested NC State goalkeeper Sydney Wootten in the fourth minute, but Wootten handled the shot with ease.

The next scoring opportunity belonged to the Wolfpack and came one minute later. NC State pressed forward, pushing BC back into the box. NC State’s Ricci Walkling found the ball at her feet and fired off a shot. It was blocked, but the rebound fell to her feet again. She managed another shot and was blocked yet again. The third time proved to be the charm for Walkling. She gathered in another rebound and let loose with a third shot. BC goalkeeper Alexis Bryant couldn’t save the shot, and the ball found the back of the net.

As the NC State players celebrated and jogged back to midfield, their coach Tim Santoro shouted at them, “Don’t let up! Don’t let up!” Meanwhile, Bryant called her defense in for a quick huddle. When they broke, the Eagles looked determined to come back from the goal.

“It’s not ideal to be down early in a game, but then again, it happened early, so we still had 85 minutes,” head coach Alison Foley said after the game.

BC responded to the goal well, challenging the Wolfpack in the first few minutes following the score. Carreiro tested Wootten again, but the goalkeeper secured another save to preserve NC State’s lead.

After the goal, the game began to get chippy on both sides. BC was whistled for a couple of fouls in the minutes following the goal. The Wolfpack, however, showed an unusually high level of aggression in its play.

At one point, BC’s Jenna Bike was running side by side with an NC State defender in the Wolfpack box. It appeared as though the defender intentionally tripped Bike up—she crashed to the ground, allowing NC State to clear the ball out of the box and eliminate the danger. The referee didn’t bring his whistle out, allowing play to continue. Had he made the call, BC would have been awarded a penalty kick and the opportunity to potentially tie the game up. Foley was furious about the non-call, shouting, “Hey! She took her down in the box! Linesman!” Despite her protests, play continued without interruption.

NC State continued to test the referees with acts of aggression throughout the game. In the 14th minute, Walkling was shown a yellow card and BC was given a free kick. The Eagles were unable to take advantage of the set piece, as Wootten handled the free kick without difficulty.

BC continued to attack the Wolfpack, but nothing seemed to work out. It seemed as though every cross sent in by the Eagles found a Wolfpack defender—BC didn’t create any real chances with crosses. BC’s best chance of the game came in the 33rd minute. There was a mad scram in front of the goal. McKenzie Meehan pushed a shot off, but Wootten blocked it. The rebound fell to Emily Langenderfer, and she fired a shot off. Wootten once again managed to deflect the shot, but once again surrendered a rebound. Lauren Berman took the third shot for the Eagles, but her attempt was blocked by an NC State defender, ending the danger for the Wolfpack.

Meanwhile, the game was getting steadily more aggressive as tensions ran high between the two teams. Both teams continued to commit fouls, but Walkling’s yellow card would be the only card of the half.

The second half was a different story. As frustrations grew, players committed harder fouls. Samantha Hiatt earned BC’s only yellow card of the game. NC State’s Kia Rankin was shown a yellow card for a hard push against Hayley Dowd, who fell and hit her head against the turf. Later, Rankin’s teammate Hannah Keogh was shown yet another yellow card. As the teams lined up for the free kick, there was pushing and shoving that resulted in Dowd hitting the turf once again. Cailyn Boch was given a yellow card for her part in this, NC State’s second yellow card in a matter of seconds. Once again, BC failed to take advantage of the set piece, sending the ball right into Wootten’s waiting hands.

“We didn’t do well enough to take advantage of the set pieces they gave us,” Foley said after the game, adding that set pieces will be a point of emphasis in practice this week.

In all, NC State accumulated eight yellow cards—including one for Santoro late in the game. The Wolfpack committed 20 total fouls, while BC finished with 13. If being overly aggressive and committing hard fouls was Santoro’s strategy for the Wolfpack, it seemed to work—they earned the win, after all. But Foley said that breaking the game up and limiting momentum for both teams wouldn’t be her strategy.

“We would concentrate a little bit more on how to be productive with the ball,” she said.