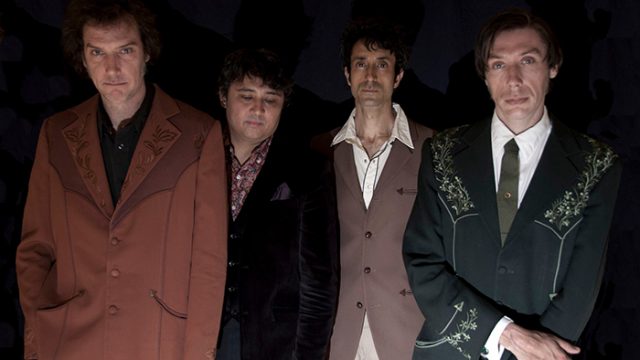 The 10th studio album by The Sadies, Northern Passages, combines elements from rock, country, and folk into a cohesive and meaningful work of art. The Sadies are a Canadian rock-country band composed of Dallas and Travis Good; Mike Belitsky; and Sean Dean. Notably, The Sadies contributed to Garth Hudson Presents: A Canadian Celebration of The Band, a tribute album to famous Canadian classic rock group, The Band.

Northern Passages opens with “Riverview Fog,” a light and airy song that highlights The Sadies’ ability to harmonize with each other. The song was reminiscent of songs like “Woodstock” and “Ohio” by Crosby, Stills, Nash (and sometimes Young) or “Lucky Man” by Emerson, Lake, and Palmer. There was a greater emphasis on the vocals and the sounds created when the band sung together than on the instruments.

Immediately after this folky tune, Northern Passages takes a sharp turn into The Sadies’ rock-and-roll side. “Another Season Again” sounds like a classic summer rock song, with influences from Chuck Berry, especially the backing guitar from songs like “Johnny B. Goode.” The subject of the song however, is anything but summer. “Let the snow fall down” is a common line throughout the song as The Sadies pine for winter. Perhaps they are showing off their Canadian origins with the desire for a colder time. The song ends with a long and extended guitar chord that seems to allow the third track to pick up right where it left off. “There Are No Words” continues the rock-like sound of Northern Passages. The song has a heavy guitar emphasis on the beats and sounds fairly upbeat until the lyrics begin: “Maybe tomorrow I’ll know what to say / But right now I have no words.” Good describes his inability to say anything of comfort in sad situations. After the vocals end, “There Are No Words” becomes almost a different song. The beat progression slows down dramatically and the guitar “twangs” much more. The final minute of the song could be the soundtrack for any self-respecting Western movie, conjuring images of horses, tumbleweeds, and copper-colored plateaus.

American singer and songwriter Kurt Vile joins The Sadies for track four, “It’s Easy (Like Walking).” The song’s lyrics are slightly humorous in their off-beat subject. With lyrics like, “My left hand’s got a permanent air-guitar tick / But don’t confuse it with a crutch / ’Cuz I like it a lot,” Vile and The Sadies compare playing music to walking. They’re even self-referential with the line “It’s like playing guitar with your brother,” as both of the Goods play guitar. The Sadies continue to display clear influences with the fast-paced folky “Through Strange Eyes.” The picking on the acoustic and the electric is very impressive and sounds much like “Ghost Riders In The Sky” by Johnny Cash.

One of the highlights of Northern Passages is the seventh track, “God Bless The Infidels.” The title is a little confusing until the opening notes of the song. The Sadies launch directly into stereotypical twangy guitars, banjos, and harmonica that sound exactly like every country song people love to hate. The message however, is quite different from what a country singer or indeed even a stereotypical country fan might enjoy. “Don’t strike me down for singing my song / Please forgive me don’t turn me into salt” is the appeal to God at the start of the song, and perhaps the appeal is warranted with the continuation, “Was it really God’s will / For Christians to kill.” “God Bless The Infidels” is funny, yet the message strikes home, especially in today’s sociopolitical climate.

The humor definitely does not continue into “The Good Years.” The Sadies sing about a woman with unrealized potential trapped in a relationship with an alcoholic and drug-addicted husband who does not appreciate her. The mood of the song is reflective, regretful, and very sad.

The final song on Northern Passages is an instrumental piece called “The Noise Museum.” The lack of lyrics allow The Sadies to showcase their obvious talents with their musical instruments. “The Noise Museum” has clear roots to bands like Blackfoot and The Outlaws. The song is very strong in beat and feeling, and is certainly a fitting end to the strong Northern Passages.

The Sadies have been fairly successful so far in their career and Northern Passages is a great addition to their catalogue of music. The band is clearly talented and if they remain as creative as they currently are, their future is bright.