Campbell Shares Stories of Heartbreak, Calls Upon Students to Serve

Simone Campbell, a Catholic nun and the executive director at NETWORK, compared herself to the stomach acid in the body of Christ at her “Mercy, Service, and Advocacy” talk Wednesday night.

“My job is to liberate energy and stir people up,” she said.

Campbell has advocated for social justice issues for decades, traveling the nation with her social-activist group, Nuns on the Bus. She has also been an advocate through her executive director position at NETWORK, a Catholic social justice lobbying group.

Campbell reflected on some of her more personal stories across her travels, specifically a woman named Margaret who Campbell said died because she didn’t have access to health care. She called on people to not forget the Margarets of their lives, and fight for what they believe is right and fair.

She recalls families like Margaret’s across her travels thanking her for fighting for them, and then herself thanking the families in return, and she realized something important in the midst of all this gratitude.

“When you are saying thank you back and forth, it’s a sign of community. It’s a sign that we are seeing each other as humans. And that, that is what our nation is in dire need of,” she said. “That is where life is.”

Her “stomach acid” idea led into her point of getting comfortable with the uncomfortable in life as she shared personal stories about her travels that have touched her in an irrevocable way.

“We desperately need the spiritual practice of letting our hearts be broken open … because when our hearts are broken open, we have room for a lot more people in our lives,” she said.

Her points then shifted from mercy and love toward advocacy and what people can do to help others as part of their civic duty.

She called on many students specifically who she knew had recently come back from a service trip. She called on them to keep these passions and experiences alive in their hearts.

Then she touched on the four virtues people can practice to deal with their broken hearts.

“I urge you to practice the virtue of joy. Joy, please,” Campbell begged.

She resents the grim nature that unfortunately follows those fighting for justice, and wants to see more joy in their practice. Joy indicates that people are connecting with other people and will be there for each other, she said. She also explained this as curiosity without judgement, and she added the importance of hope under this point.

The third virtue she explained was sacred gossip.

“This is where you tell the stories of the people that have broken your heart … you share from the inside out, and that is what makes the difference,” she said.

The last virtue is the virtue of doing one’s part to respond. She said people have these great experiences, but then need to act.

“The question becomes, ‘now what?’… I really believe what our 21st century desperately needs is a little bit of space and quiet for you to listen to that spirit alive inside of you,” she said. 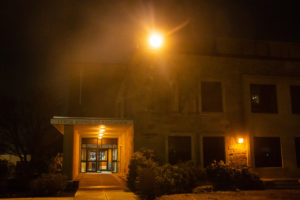