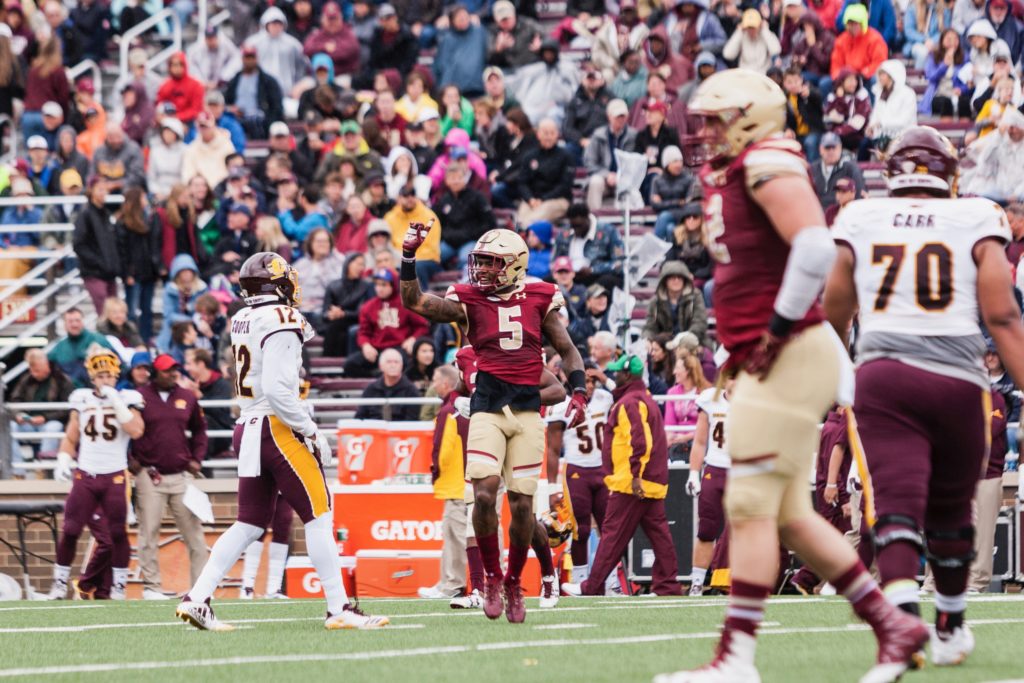 Walker Sets Up Eagles for Easy Win Against Central Michigan

Turnover on downs. Safety. Just three minutes into Saturday’s game against Central Michigan, Boston College football was staring at a 2-0 deficit to its Mid-American Conference foe. The Eagles haven’t lost to a MAC team since 1969. And scattered droves of Parents’ Weekend spectators started squirming in their rain-soaked seats.

Then Michael Walker got his hands on the ball.

The Eagles’ junior return man took the Chippewas’ next punt deep into opposing territory for a career-high 61-yard gain. That set up Jon Hilliman for a six-yard score, his first rushing touchdown of the season, five games in. On the next drive, CMU again elected to punt to Walker. Again, he torched the lackluster coverage for 34 yards. Following a roughing the passer penalty on fourth down that gave BC life, A.J. Dillon hit a gap and barrelled into the end zone for a 15-yard touchdown run.

Any momentum that the Chippewas had gathered was lost in Walker’s long returns. All of a sudden, fans weren’t witnessing a potentially-historic upset—they were watching the first Eagles team since 2014 to score two touchdowns in the first quarter against an FBS squad.

Defensive and special teams domination masked a dismal offensive performance, as BC snapped its three-game losing streak with a 28-8 win on a gloomy afternoon in Chestnut Hill.

“We went for it, and then we got the punt right down the one [yard line] and then we had a miscue up front and hit us in the backfield,” head coach Steve Addazio said. “But you know, those things are going to happen right now. You’re talking about the apex of your offense has got first-year players in there right now.”

CMU (2-3) simply shot itself in the foot too many times to challenge the Eagles (2-3), which entered the matchup as 10-point favorites. Quarterback Shane Morris tossed three interceptions—two to Lukas Denis, who became Power Five’s pick leader with five this year—and his team committed too many costly penalties to hang with BC’s vaunted secondary. The Chippewas did show signs of a comeback in the second quarter, when Morris orchestrated a seven-play, 62-yard touchdown drive to make it 14-8—a two-point conversion was overturned thanks to tight coverage by Kamrin Moore.

Before the half, though, Walker answered with his third explosive return of the day, fielding a short punt and scampering 29 yards into the red zone. A few plays later, Hilliman finished the brief drive with a two-yard touchdown run, putting BC on top, 21-8. Yet, despite leading by three scores, the Eagles entered the half with fewer total yards than CMU.

“We didn’t get very good punts,” CMU head coach John Bonamego said. “Part of our plan was not to let that kid field the ball, and he was able to catch a couple—all three of those really downhill where coverage could even get anywhere near him.”

It wasn’t until midway through the third quarter that BC finally settled in on offense. Anthony Brown found Jeff Smith on a short slant, and the junior wideout cut back to the sideline for a 23-yard gain. Soon after, on third and short, Dillon shot up the middle for 18 yards down to CMU’s eight-yard line. After the Chippewas stuffed a pair of runs up the gut, Brown dumped a pass down to Hilliman in the flat for his third touchdown of the afternoon. In total, the Eagles marched 89 yards over four and a half minutes to extend their lead to 28-8.

Until that drive, BC’s last four touchdowns were all set up by a 25+ yard punt return by Walker. Having an elite return game is good, but relying on it to score is generally not.

There were bright spots—Brown looked a little more mobile, picking up key yardage on the ground to extend multiple drives. He didn’t take many deep shots, but that may have been due to lingering shoulder soreness from last week’s game at Clemson.

“Quite frankly, I didn’t know if Anthony [Brown] would play in this game,” Addazio said.

Dillon had his best game as an Eagle, rushing for a career-high 120 yards on 25 carries. But with under a minute remaining in the blowout, Dillon left the game with what appeared to be a neck injury.

The Eagles pieced together just one significant scoring drive against a defense that is worse than all but two teams in the ACC. Prior to Saturday, CMU had been allowing an average of 458.8 yards per game. BC managed just 309 yards. Even so, a win is a win.

“I think we’re coming into that VTech game a little more hungry, a little more confidence and faith that we can do this,” Hilliman said. “Let’s go, we played Clemson toe-to-toe, dropped the rope a little bit, same thing with Notre Dame. But we know if we come with that same energy we can shock this team, and no one is going to be shocked in the locker room if we do it.”