In an email sent Thursday afternoon, Boston College Dining Services confirmed that weekend Late Night dining hours on Lower Campus would be 9 p.m. to 2 a.m at Addie’s Loft. The email also officially announced that mozzarella sticks and chicken tenders, old staples of previous years’ Late Night dining menus, would be returning to the current menu on weekends. Those items returned to the weekend menu last week.

Dining Services announced revamped menus, hours, and locations this fall. Last week, The Heights published an article on tweaks BC Dining would make to its initial changes that included interviews with Meghan O’Neill, associate director of restaurant operations, and Beth Emery, director of BC Dining. The two noted difficulties balancing staff needs, budgeting, and student needs led to the new changes. They expressed regret about to not communicating with the student body more clearly about the new changes so as to assuage some of the initial consternation that broke out in the wake of the announcements at the beginning of the semester.

The Undergraduate Government of Boston College responded with a post on its Facebook page, commending BC Dining for “[bringing] back most of the Late Night elements we know and love.”

“Our conversation with Beth Emery, Megan O’Neill, and [Dining Services’ Associate Director of Food and Beverage] Michael Kann last Friday was very open and fruitful,” Reed Piercey, UGBC president and MCAS ’19, said. “They were honest about the fact that changes to Late Night were not communicated very well to the student body and showed genuine interest in hearing what we thought could be improved.”

Piercey and Ignacio Fletcher, UGBC executive vice president and MCAS ’20, discussed the student representatives’ concerns about the move to Addie’s, and Piercey commended the administrators’ willingness to listen to the student body’s concerns.

“While they unfortunately said that a move back to the first floor would not happen at this time, Dining leadership was happy to take our suggestions about how the service at Addie’s could be improved,” he said.

Piercey cited BC Dining’s commitment to improving the payment system implemented this year—students must pay for food and then hand a ticket to the cooks making food before receiving their order—and better managing lines and overcrowding. Signs will be added to Lower dining in order to showcase the elevator to the second floor that can be used by students who might not be able to use the stairs.

“I think they really are doing their best to recreate the fun social experience we all know from weekend nights [in the past] on the second floor,” Piercey said. “And if the universal feedback going forward is that the Addie’s location really is unmanageable, I’m sure they would consider that as well.” 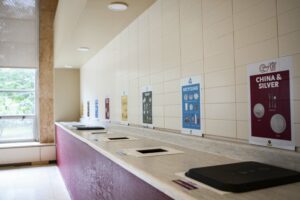