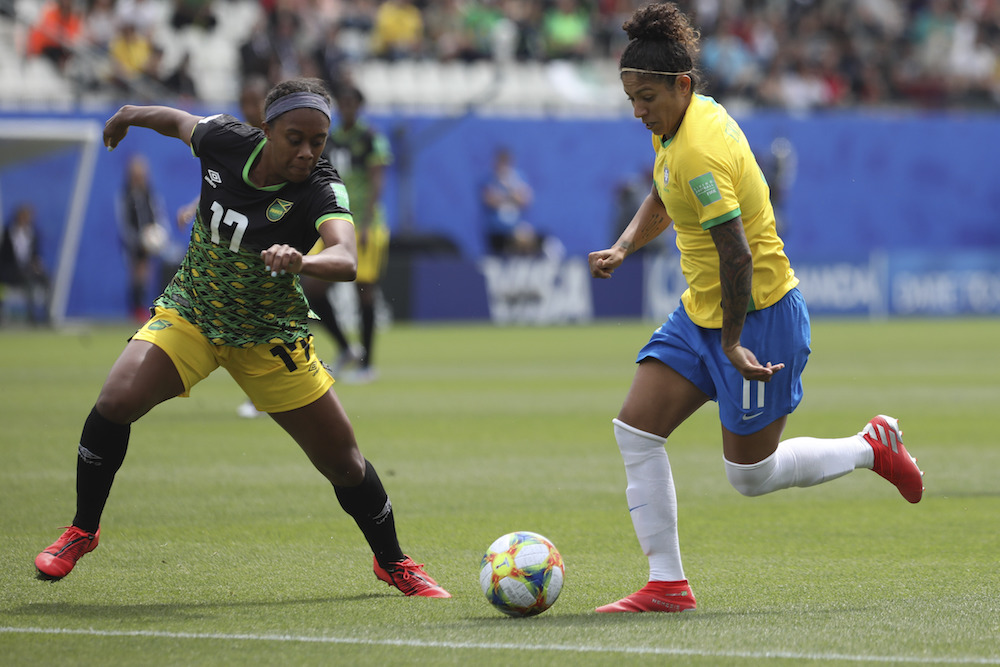 For four years, Allyson Swaby, BC ’18, was the heart of Boston College women’s soccer’s backline, starting 69 games and eclipsing the 1,500-minute mark each of her final two seasons on the Heights. She adopted a similar role this summer—only this time she was playing for her country on the sport’s biggest stage.

Working alongside team captain Konya Plummer, Swaby helped hold down the fort on defense, as Jamaica, known as the Reggae Girlz, finished third in the 2018 CONCACAF Women’s Gold Cup and made its first-ever FIFA World Cup appearance. While in France this past week, Swaby soaked in every minute of the experience, literally. The dependable defender logged 270 minutes during the Reggae Girlz’s three-match stay in France, starting every game at center back.

Playing in Group C with Italy, Australia, and Brazil, Jamaica’s storybook run came to an end. Although the Reggae Girlz recorded their first-ever World Cup goal on Tuesday against Australia, they were outclassed by each of their opponents in France. In fact, the rest of Group C outscored Jamaica, 12-1. At the moment, the Reggae Girlz’s -11 goal differential is the second-worst of any nation in this year’s World Cup. Of course, Thailand—which lost to the United States, 13-0, takes the cake with a -17 goal differential through two matches of group play.

Regardless of Jamaica’s 0-3 record and quick exit, the Reggae Girlz made history just by being there. And for Swaby, the journey to France was an experience in itself.

Back in January 2015, the 5-foot-8 defender—following a freshman campaign where she started all of BC’s 19 matches and earned a spot on the 2014 All-ACC Freshman Team—was called up to the U-20 U.S. Youth Team. That same year, Swaby, whose parents are Jamaican natives, was invited to play for Jamaica during Olympic qualifications. But she didn’t see the field, and the Reggae Girlz were eliminated by Trinidad and Tobago during the final round of Caribbean zone competition.

After graduation, Swaby moved to Europe to play for Knattspyrnufélag Fjarðabyggðar, a team in the Icelandic soccer pyramid’s second division. All the while, she received another chance to play for her country—with her sister, Chantelle, a senior defender for Rutgers—and this time she was a key component of the Reggae Girlz’s backline. Jamaica went undefeated in the Carribean zone of qualifying, finishing atop the five-team group.

“We played in front of a sold-out crowd in Haiti of nearly 12,000 people,” Swaby told BCEagles.com back in June 2018. “That’s the largest platform I’ve ever played on. It was very unique and an indescribable experience. There is a sort of passion that people evoke when they cheer on their country, and I felt incredibly proud to represent something so important to my family and other Jamaicans.”

During the 2018 CONCACAF Women’s Gold Cup, the Reggae Girlz finished second in Group B and then lost to U.S.A in the semifinals, only to beat Panama in a dramatic penalty shootout to book their trip to France for the 2019 World Cup.

Swaby’s World Cup might have only spanned a week, but her road to France can be traced back years—and BC was undoubtedly a significant pit stop amid the defender’s ascent.

“The people around you really make it worth it [to play at BC], and it always reminds me why I started playing the game, even when things might seem too difficult,” Swaby told BCEagles.com last June. “I’ve taken away a great network of people that will support me and help me to the best abilities in any future endeavor whether they involve soccer or not.”