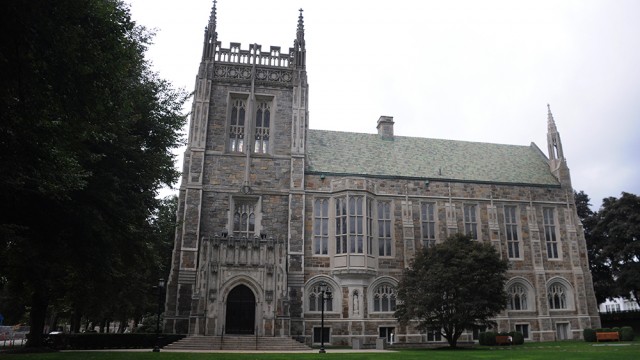 The Belfast Project That Students Forgot

In the past year, we have witnessed our country plummet in its Global Press Freedom Ranking, the U.S. Supreme Court refuse to step in on behalf of a Pulitzer Prize-winner facing jail time for protecting a source, and concern over Internet freedom growing. We’ve discussed freedom of the press, feared the NSA, and worried about all of our Facebook conversations going public. But where were we, the Boston College community, when confidentiality, protection of sources, and the integrity of academic freedom were being fought over by the U.S. Department of Justice, three senators, six congressmen, and three nations, right here on our campus?

Last May, BC announced that it would return recorded interviews from the controversial Belfast Project to its participants. This not only marked the end of a string of legal disputes involving BC, the UK, and the U.S. Department of Justice, but also the death of a groundbreaking research project.

Starting in 2001, the Belfast Project was aimed at documenting the three-decade ethno-nationalist conflict that wracked Northern Ireland from the 1960s to 1998, known as the Troubles. Organized by Executive Director of the Center for Irish Programs Thomas Hachey, then-Burns Librarian Robert O’Neill, Irish journalist Ed Moloney, and former Irish Republican Army (IRA) member and historian Anthony McIntyre, the project consisted of interviewing 46 former paramilitary fighters from both sides of the conflict. The project directors intended each interview to remain sealed until the death of the respective interviewee.

In 2010, the first interviews were published in the book Voices from the Grave, by Ed Moloney. These interviews, with former IRA leader Brendan Hughes and former Ulster Volunteer Force member David Ervine, were only made public because of their deaths in 2008 and 2007, respectively.

Shortly after, the British government contacted the U.S. Department of Justice, seeking two interviews from the project that might shed light on a murder committed during The Troubles. After deliberation, the University agreed to hand over Hughes’ interviews, but kept the interviews of Dolours Price on the grounds that she was, at that point, still alive.

Eight months after the initial subpoena, the British government issued a second subpoena, now requesting all of the interviews in the BC archive that contained information about the abduction and death of Jean McConville.

The subpoenaing of the tapes threatened the project. One of the first academic endeavors to reveal new details on the Troubles through interviews with former IRA and unionist members, and the only of its scope, the Belfast tapes had the potential to shed light on the sensitive and complex problem of sectarian violence.

The possible ramifications of the subpoenas, however, ran far deeper than the tapes. Traditionally, academic research is granted higher protections from the law so that knowledge and truth can be pursued for the advancement of society. These subpoenas threatened this notion and challenged the idea that academic freedom is essential to the vitality of our society.

The subpoenaing of the tapes also threatens further research. As University Spokesman Jack Dunn told WBUR radio, reported by NPR in May, “Clearly, this could have a chilling effect on oral history projects.” Without protection, researchers will face uncertainty from those who gather information from confidential sources and the sources themselves.

In defense of his own work and academic freedom, McIntyre even claimed that a researcher is actually obliged to destroy his or her material before giving it to a person who could bring it harm, according to an article by Beth McMurtrie published in The Chronicle of Higher Education in January. He also offered to take the archive into his possession in order to keep it from law enforcements, risking jail for the sake of research.

Initially on the same page as McIntyre, BC attempted to protect the files, appealing the subpoenas several times. As proceedings continued, the administration decided to distance itself “from the reckless rhetoric of Ed Moloney and Anthony McIntyre,” as Dunn put it in an interview with McMurtrie for the aforementioned article.

While BC was distancing itself from McIntyre and Moloney after the second subpoena, Senators Chuck Schumer, Scott Brown, and John Kerry, along with six other congressmen, wrote to then-Secretary of State Hillary Clinton calling for a withdrawal of the subpoena.

And the students of BC remained silent, uninformed. When I questioned my peers about the project, I got the resounding response, “What’s that?”

As academics across the nation followed the fate of these tapes this spring, where were the BC students?

It is our full-time job as students to learn, to immerse ourselves in the pursuit of knowledge. We are the next generation of researchers. And yet, there were no big conversations on campus about the project that might redefine future research. Why weren’t we concerned with the questions circling our campus, the future of our own academic freedom?

Furthermore, why has BC refused to be open with its students about the project? The University never participated in a dialogue with students over the legal disputes.

The Belfast tapes case raises many questions. What degree of freedom should academic research have? How responsible are researchers and their universities in protecting interviewees who reveal sensitive information? At what point does the pursuit of justice supersede the pursuit of truth and knowledge?

I am not suggesting that the student body of BC had the ability to decide the fate of these tapes, but we should have at least known and taken part in the discussion.

Despite McIntyre’s efforts, the relevant tapes were turned over. “There has been a shadow cast over this type of research,” Richard English, a professor of politics at the University of St. Andrews in Scotland, told The Chronicle for the aforementioned article. Many scholars, English said, have expressed apprehension about pursuing projects like this, for fear of it coming to naught. The Belfast Project is dead now—there will be “no more books, no more revelations,” as McMurtrie put it in her article. And for McIntyre, “It is the single most devastating thing that ever happened to me,” he told The Chronicle. “It can never be used now. It’s all done for nothing.”