Home » Optimism Spread To The T 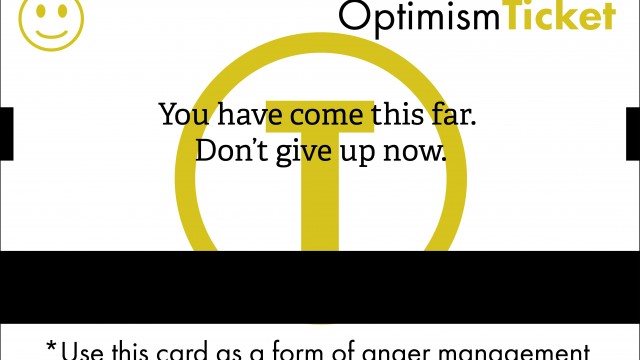 Optimism Spread To The T

Stagnant after finishing my last two exams in the middle of midterms week, I shifted my efforts on Tuesday afternoon from flipping through Spanish flashcards to sealing and signing envelopes. Thanks to my Dad, there always seems to exist a disparity between how many letters I receive and how many I send, so finally getting around to using my overpriced stationery made its way to the top of my housekeeping list. Stamped and addressed, though my letters would each make their way to different mailboxes along the east coast, they all seemed to convey a similar theme: there is a s—t ton of snow in Boston.

How much longer can the city’s eight feet of snow be the topic of conversations, local media, emails, classes, or Metro columns—to borrow a phrase from my favorite misunderstood mathlete—the limit does not exist.

I walk to class confined between walls of ice, my leather boots are permanently coated in a salty residue that is more than likely deteriorating them (sorry, Mom), I can’t remember the last time I had full feeling in all of my fingers and toes, it takes three times longer for the Comm Ave. bus to make its route, and I am sick and tired of looking like an overstuffed, sniffling, puffy-faced eskimo. The city and public transportation have been shut down for more than two full days, local stores and restaurants have lost business as fast as parked cars and fire hydrants have been lost in snow piles, and no one can walk outside without slipping or freezing. The storm was so bad it even warranted its own blizzard snapchat geofilter.

Of course the city can’t help but talk about it. The snow has inconvenienced everyone from Eagles to Terriers, commuters to professors, Bostonians alike.

Instead of using the snow as a means to complain, as I have and probably will throughout April when it melts and floods my dorm room, one local has used it as an excuse to spread some smiles. Alice Donovan, a graduate student at Boston University and a graphic designer, has channeled the city’s snow-induced irritation to fuel her latest creation from BU’s Engineering Product Innovation Center, “Optimism Tickets.”

Donovan and her fiance handed out the little cardstock rectangles at both the Park Street and Kenmore MBTA stations, during morning rush hour last week. Designed to look like Charlie Tickets, only a little bit larger to prevent them from fitting in the fare machines, Donovan’s Optimism Tickets are a positive spin on the Bostonian’s hectic commute. Instead of the traditional graphic, her tickets include positive sayings and anecdotes in hopes of alleviating the stress brought on by delayed trains.

“Trust the journey. This card is not worth anything but it might make you smile or perhaps entice a sarcastic grin. Maybe even an ‘lol.’” read the tickets, whose expiration is “when the snow melts.”

As a T-Rider, I can’t say that a yellow, ticket look-alike with a fortune cookie-esque phrase printed on the back would make my crowded ride home from volunteering, during rush hour, an enjoyable experience, but it might make me less likely to complain all the way back to my bunk bed. Yes, the snow is inconvenient and delayed trains are almost as terrible as BU winning the Beanpot, but Donovan’s Optimism Tickets are a nice gesture to remind us that we will get where we are going, eventually, and probably faster than if we were taking the B-Line anyway.

Though Donovan’s Optimism Tickets realistically have little impact on the seemingly unending delays that the MBTA has faced due to the recent snow accumulation, they are a much needed reminder that life, like commutes, goes on regardless of how many inches may blanket a city over a two-month period.