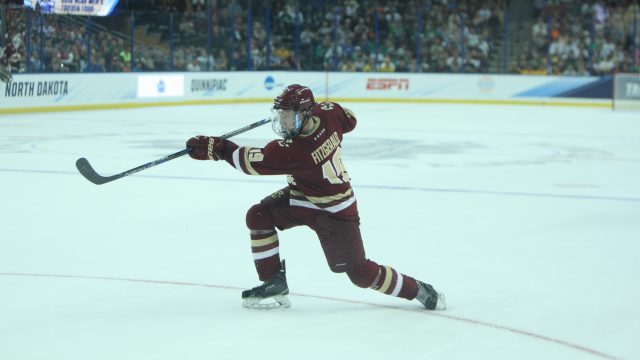 A thrilling Beanpot victory, a Hockey East regular-season title, and a 25th appearance in the Frozen Four, the most of any program in the NCAA Division I are just some of the highlights for Boston College men’s hockey in the 2015-16 season. Now, it’s time to do it all again.

On Thursday afternoon, head coach Jerry York announced the finalized schedule for the Eagles for the 2016-17 season. The season will feature at least 36 games—14 at home, 14 on the road, and eight at neutral sites. Of the 36, 20 come in Hockey East play, while the other 16 will be non-conference games. Ten of BC’s opponents played in the NCAA Tournament last season.

“It’s a great schedule and we go out of our way to challenge our team every year,” York told BCEagles.com.

The Eagles open the season in an exhibition game against Canada’s Carleton University. The game takes place on Sunday, Oct. 2, at 2:30 p.m. at the Warrior Ice Arena, the home of the NWHL’s Boston Pride and the practice arena of the Boston Bruins.

BC will then travel to Denver for the Icebreaker Tournament to officially open the regular season. It will first take on the United States Air Force Academy on Friday, Oct. 7, at 6:30 p.m. The winner takes on the winner of the Denver-Ohio State game. The Eagles then travel to the Kohl Center in Madison, Wis., for a two-game slate with the Wisconsin Badgers.

One of the biggest highlights of the non-conference slate is a matchup with defending champion North Dakota at New York’s Madison Square Garden on Saturday, Dec. 3, at 7:30 p.m. The Eagles defeated the newly-dubbed Fighting Hawks in their most recent matchup, a 6-2 victory in 2011. Another primetime matchup comes against Providence College on Saturday, Jan. 7, at 5 p.m. at historic Fenway Park. This will be the third different sport BC plays at Fenway Park in as many school years—BC won college baseball’s Beanpot in April 2015, while football fell to Notre Dame, 19-16, last November. Men’s hockey will also take part in the Three Rivers Classic at Pittsburgh’s Consol Energy Arena on Dec. 29 and 30. The first game will be against Quinnipiac, the team that knocked the Eagles out of the NCAA Tournament last season—BC’s next opponent depends on its result and the result of the Ferris State-Robert Morris game.

Other non-conference opponents for the Eagles include Holy Cross at the DCU Center, Harvard, Minnesota, and Arizona State. It will be BC’s first matchup against the Sun Devils, college hockey’s newest program.

The Eagles open conference play in North Andover, Mass., against Merrimack on Tuesday, Oct. 25, at 7 p.m. Their Hockey East home opener comes that Friday, Oct. 28th, at 7 p.m. against Providence. BC will play home-and-home series with each of the Hockey East teams, except Maine and Vermont. This season, the Eagles will play Vermont at home for a two-game series, but will travel to Maine for a two-game series. One of those two games will be on campus in Orono, Maine—the other will be at Portland’s Blue Cross Arena. For the second year in a row, the Eagles will close out the regular season at Lowell’s Tsongas Center against the River Hawks, on Friday, Feb. 24, at 7 p.m.

BC will resume its Green Line Rivalry against Boston University in early January. The Eagles head to Agganis Arena on Friday, Jan. 13, at 7 p.m., and will welcome the Terriers to Chestnut Hill on Monday, Jan. 16—Martin Luther King, Jr. Day—at 3 p.m. The games will be the 261st and 262nd matchups in college hockey’s most hateful rivalry.

Tournament season begins with the 65th annual Beanpot, to take place at TD Garden on Monday, Feb. 6 and Monday, Feb. 13. The Eagles will play their first-round game against BU at 8 p.m. The Hockey East Tournament will begin on Friday, March 3. The championship game of the tournament will be on Saturday, March 18. All 12 Hockey East teams qualify for the tournament, with the top four seeds earning a bye to the second round.

The NCAA Tournament begins in the regional rounds the weekend of March 24-26. The four regionals will be held at the Dunkin’ Donuts Center in Providence, R.I.; the Verizon Wireless Arena in Manchester, N.H.; U.S. Bank Arena in Cincinnati; and Scheels Arena in Fargo, N.D. If the Eagles advance to the NCAA Tournament, it will be the seventh year in a row and 18th time in 23 years with York as head coach. The Frozen Four will take place on Thursday, April 6 and Saturday, April 8 at Chicago’s United Center.