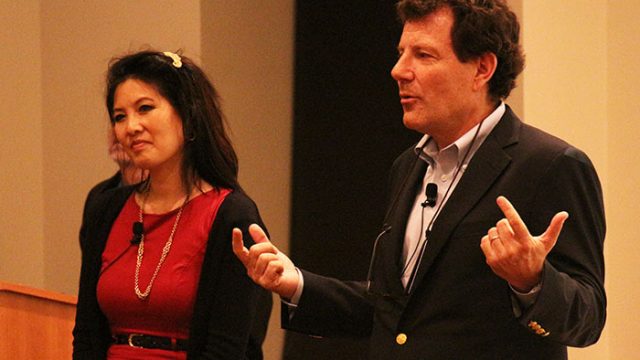 Nicholas Kristof started off his talk in the Yawkey Center Thursday night with a story about a three-foot rat. Known as Gambian pouched rats, the giant rodents are trained to sniff out landmines, which they do 10 times more efficiently than people—despite expecting only bananas for pay. Kristof’s rat, trained in his name as a Father’s Day present, now spends its days working in Angola. Kristof brought it up as an example of a new, creative way of addressing an old challenge, the type of thinking he and his wife, Sheryl WuDunn, think will be needed to fix global inequality.

“People often ask me how it is that I can be covering global poverty, genocide, sex trafficking, war, and yet be pretty upbeat,” he said. “And the reason is that I think there is a missed perception about the trajectory of the world today.”

Kristof and WuDunn presented “A Path Appears: Reporting on Gender Inequities and Global Health” in two 20-minute talks, part of Boston College’s Park Street Corporation speaker series on health and ethics. Kristof is a New York Times columnist, where he writes about women’s rights, human rights, and international affairs. Joyce Barnathan, president of the International Center for Journalists, called him “the conscience of international journalism” in 2013. WuDunn was the first Asian-American reporter at the Times, and has also worked as a business executive. Together, they have written two books, Half the Sky: Turning Oppression into Opportunity Worldwide and A Path Appears: Transforming Lives, Creating Opportunity, and won a Pulitzer Prize in 1990 for their coverage of the Tiananmen Square protests.

According to Kristof, polls consistently show that about 90 percent of Americans think global poverty is getting worse or staying the same, which frustrates him because, in reality, major progress has been made. Eighty-five percent of adults worldwide are now literate, and child mortality decreases every year. But an area that still needs improvement, WuDunn and Kristoff said, is women’s empowerment and education, which they called the 21st century’s chief moral challenge, akin to slavery in the 1800s.

WuDunn, who spoke before Kristof, began her talk by telling the audience about Daj Manju, a girl they met who lived in rural China. Daj Manju’s annual school fee of $13 was too high for her family to afford, so she stopped attending despite being the best student. She kept going to the school to wait outside, hoping to find discarded books, pick up bits of knowledge, and maybe see her teachers again.

WuDunn and Kristoff wrote about her in the Times, and readers began sending $13 checks to get her back in school, and one reader even sent—they thought—$10,000, which could finance the school for years and even pay for a renovation. When they called the donor to thank him, he paused for a minute and said he had only given $100. Turns out somebody at the bank overlooked a decimal point, but no matter—the bank donated the difference.

The result, WuDunn said, was that they could run an experiment with this rural school. They tracked the trajectories of the girls who were able to attend because of the donation, including Daj Manju, who ended up going to high school and getting vocational training in accounting. Eventually she moved to southern China, got a job, and began sending money back home, where her family rebuilt their house. Other girls in her class had similar opportunities.

“It was a revolution for them, a transformation, and that’s what we learned first-hand that girls’ education can do,” WuDunn said.

Those kinds of opportunities for women have historically been stymied by some cultures. Baby girls are sometimes viewed as undesirable, for instance. WuDunn showed a picture of an undernourished Ethiopian girl they met in a food clinic, whose brothers were perfectly healthy—her parents withheld food from her because her brothers would be more valuable to them. According to economist Amartya Sen, globally there are about 60 to 100 million fewer women than men, likely because in some cultures women lack access to education, health care, and nutrition.

“One of the best and most efficient ways to fight poverty, and sometimes terrorism, is to bring women into the mainstream of society and get them schooling and jobs,” WuDunn said. Women’s access to education was one of the key metrics used in Afghanistan by the U.S. military to measure regional stability, for example.

Kristof spoke next, discussing what he called the misguided notion that some of these problems are too big to solve—around the world, for example, 60 million girls who should be in school are not.

“We are not going to solve that problem in this room tonight,” he said. “But I’m a believer in drops in the bucket.”

He also responded to potential questions about his and his wife’s sometimes controversial brand of activist journalism. At a question-and-answer session before their talks, Kristof and WuDunn were asked whether they believe their work has contributed to a “white savior” mentality of foreign workers going into poor countries or regions, diagnosing their problems, and prescribing fixes.

“I do think that sometimes it’s done in ways that take the voice from local people, leave them bystanders, and I think that’s ethically problematic,” he said. The white savior controversy is closely associated with the Kony 2012 movement, which many criticize as unsuccessful, but Kristof said that empirically, fewer people are dying in the Democratic Republic of Congo as a result.

“I understand that some people were discomfited by the video, but, boy, Congolese in northeastern Congo were kind of thrilled that finally someone was paying attention, when their own president … was completely uninterested,” he said.

Kristof also talked about the opportunity gap in the United States and worldwide, connecting it to an “empathy gap.” The poorest 20 percent of Americans give more to charity relative to their incomes than the richest 20 percent, which he thinks is about how wealthier people perceive poverty.

“If you are affluent in America in 2016, then you’re insulated from need,” he said. “You’re intellectually aware of it, but it’s not something you encounter.”

That insulation, he argued, makes it easy to construct narratives where poverty is all about personal responsibility. While Kristof thinks self-destructive behaviors are real and part of the problem, there’s also another side to the argument.

“As long as we’re talking about personal responsibility, I think we also have to be talking about the responsibility of each of us as a society, especially when we have these proven interventions that will create opportunity,” he said, adding that he hopes BC students study abroad in places like Bangladesh or Tanzania, where their perceptions and worldviews can be challenged and better informed. 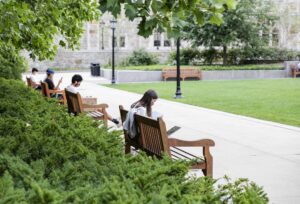 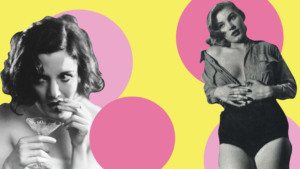