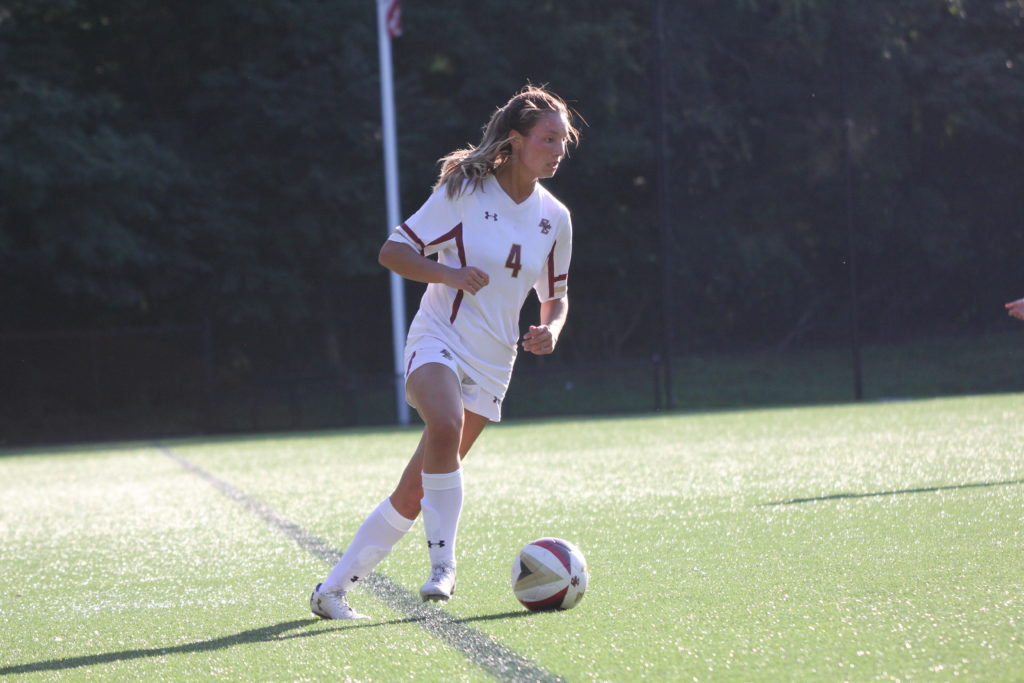 Coming off a dominant win against Syracuse in its conference opener, Boston College women’s soccer (9-0, 1-0 Atlantic Coast) faces a much tougher test in ACC rival No. 7 Florida State (8-1-1, 1-1). BC will look to maintain its perfect record against the Seminoles in the midst of a rigorous conference slate, which includes upcoming road dates with Wake Forest and Clemson.

The game will be available to stream on ACC Network Extra.

1) The Eagles’ defense has absolutely stifled opponents this season. Over the course of the first nine games, BC has only let up three goals, and it has yet to allow a single assist.

2) After Virginia fell to Clemson, BC is the only undefeated team left in the ACC, yet the Eagles are still unranked in the United Soccer Coaches Poll. A big win over FSU would vault them up the rankings.

3) Sam Coffey, Olivia Vaughn, and Gianna Mitchell lead a balanced offensive attack for the Eagles. Each player has tallied five goals so far, and Coffey has recorded nine assists, more than any other player in the country.

1) If there’s one team that can match BC’s defense, it’s FSU. The Seminoles have only let opponents score two goals through 10 games. Their goals against average of .196 is good for fourth in the nation.

2) Interestingly, this is only the second road game that the Seminoles have played all season. In its first road game, FSU came away with a win against Wisconsin, 3-0. We’ll see if FSU is able to adjust to a less friendly atmosphere.

3) Incredibly, 13 FSU players have scored a goal this season. Lujie Zhao paces the team with four.

The last time these two teams met, BC suffered a 3-0 loss in Tallahassee. FSU held the Eagles in check all game long. In fact, BC only got off three shots on goal.

It can shut down FSU’s offensive attack. The Seminoles have scored 2.20 goals per game, and they boast a very balanced offense, as 13 players have found the back of the net. With two top defenses squaring off against each other, this game projects to be a slugfest.

It can’t break through FSU’s staunch back line. This proved to be the Eagles’ downfall last year, so they’ll look to avoid a similar fate. As BC goes through a tough ACC slate, a win against FSU would be an enormous confidence boost, and it would prove that the Eagles are indeed conference title contenders.