The event began with a reception complete with traditional Mediterranean food. A video introduced the ASA’s membership, filmed in the mockumentary style of The Office. The audience, which filled the Rat’s central aisle, received these preliminaries with enthusiasm.

Two students opened the show with solo performances, heralding a night of exceptional musical acts from people of all ages. While most of the performers were undergraduates, instructors and older Boston College community members also took part.

Many of the show’s students are actively enrolled in Arabic classes at BC. Those in elementary classes delivered their acts’ introductions in Arabic, an impressive display that belied their short time studying the language. They showed off on the catwalk with traditional dress and on the dance floor with sword fighting. Other Arabic students read and translated poetry, including that of Kahlil Gibran, an early twentieth-century Lebanese writer and one of the world’s best-selling poets.

The Middle Eastern Ensemble performed three numbers and announced several upcoming events. Led by director and musicologist Ann Lucas, they started with a slow, percussive belly dance song that showcased its talented first-row violinist’s skills. Lucas herself is an accomplished flautist and had a solo section during the piece.

They followed up with “Ghannili Shway Shway,” originally sung by Egyptian singer Oum Kalthoum. The song, which they performed as a sing-along, has multiple possible translations for its title, including “sing to me a little” and “sing to me softly.” The sing-along chorus gave the crowd the chance to try their Arabic pronunciation and partake in the performance when the ensemble’s singer handed it to them.

He also taught the audience to ululate, mimicking the high-pitched trills that cultures throughout the Arab world use for celebration. Although the crowd was hesitant to take to ululating at first, it eventually warmed to the practice. Every applause thereafter was scattered with the sound, letting the audience participate in Arab culture even between performances.

The ensemble ended with “Misirlou,” a guitar song written by monumental rock and roll artist Dick Dale, who is well known for incorporating elements of Middle Eastern music into his innovative guitar riffs. Along with impressive qanun and saxophone solos, the song appealed to the audience’s sense of modern American music—the track was sampled in the 2005 Black Eyed Peas song “Pump It.” After it ended, Lucas announced the Middle Eastern Ensemble’s upcoming show, featuring music from Arab cinema and a new Middle Eastern dance course in the music department.

The night concluded with two highly anticipated dance numbers. The stomp-heavy dabke, a traditional Levantine line dance, brought audience members into its fold as its students wound their way around the stage. Finally, 18 BC students performed a complicated belly dance routine, complete with homemade costumes.

After the show wrapped up, Sary Baladi, the president of ASA and MCAS ’19, expressed her desire for students to take away new knowledge about the Arab world and its place at BC.

“Our hope is for people to leave with a more open mind about what Arab culture is and its presence on BC’s campus in the form of students, faculty, and extracurriculars offered,” Baladi said.

Featured Image by Matt Trenton / For the Heights 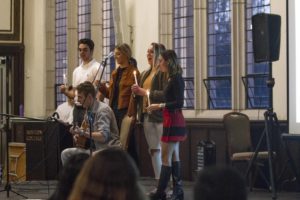