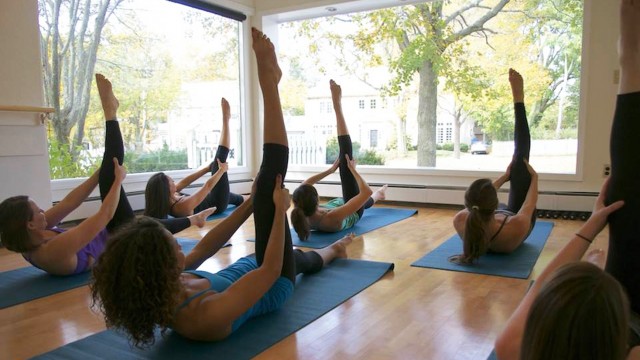 A neighborly disagreement-turned-legal-dispute is threatening the future operations of Modern Barre Fitness, a local exercise studio that has been servicing Boston College students and local residents for two years.

On Tuesday evening, clients and neighbors of Modern Barre—including BC professor and Chair of the music department Michael Noone—gathered in the Aldermanic Chambers of Newton City Hall. The group was composed of over 100 neighbors of the University and Newton residents, as well as BC students and faculty, among others, who attended to hear the municipal legislator’s decision on a local zoning ordinance of particular concern for studio owner and principal instructor Julia Robinson.

Although Modern Barre limits class sizes to only 12 students and encourages off-site parking, Noone and other neighbors have dealt with an overcrowded parking lot and a higher level of use in the space than the permit legally allows for. Especially in wake of the unavoidable traffic hazards that were generated by snow and ice last winter, local residents hope to eliminate potential overcrowding and public safety concerns where they can.

“The concern my client has is, quite simply, this is a residential neighborhood in which there is a site that has in the past had some fairly low intensity use businesses, but it is currently being used illegally,” said Ken Parker, Noone’s legal representative. “The concerns are two-fold: public safety and intensity of use. My client is concerned given the property owners past disregard for the zoning laws—he has asked for forgiveness rather than for permission.”

Robinson was a member of the New England Patriots cheerleading squad for the 2008 and 2009 seasons, and was inspired to open Modern Barre because of that background. Although Modern Barre has been operating out of its Newton location for two years, it has recently come to the attention of neighbors and Robinson, herself, that the current zoning permit that has allowed the business to operate in an area that is zoned residentially is flawed.

The current nonconforming use that permits Modern Barre does allow a business to operate out of the Newton location, but does not outline all of the specifics of use that the fitness studio legally needs. Initially, the property’s landlord was granted the permit for a small massage parlor that would maintain very minimal traffic in and out of the shopping center. He granted the lease, however, to Modern Barre instead.

Prior to opening, Robinson consulted with a legal advisor. She said she believed she had the proper legal permits and grounds to start the business. The current legal discord is a new development for the studio and its neighbors, as the property’s landlord recently requested an additional permit to grant allowance for another business operation on the same property. The Tuesday hearing surrounded Robinson’s request for the special permit to increase the allotment of people and specific use of Modern Barre.

Instead of a simple matter of rezoning, the circumstances surrounding Robinson’s business have become a battle between Modern Barre and some of the surrounding residents, including Noone.

“It has become quite an uncomfortable situation for the students, staff, and for Julia,” said Scott Farmelant, family spokesman for Modern Barre. “They are a business that has been providing wellness services to hundreds of Newton residents and when it comes to this particular situation it seems that the neighbors are taking out their frustrations in a misdirected way.”

Clients and operators of Modern Barre have said that neighbors are using the earlier legal oversight to threaten the approval of the zoning permit, alleging that some nearby residents have been hostile and have made false accusations regarding the business’ intensity of use. In an email sent out to Modern Barre’s clients regarding the situation and the public hearing, Modern Barre highlighted Noone as one of the leading proponents of these claims.

“Professor Michael Noone has taken actions that have been intimidating and unconscionable,” Farmelant said. “He has taken numerous photos of students and clients during their classes, has stopped instructors and students as they come and go and made them feel very uncomfortable.”

More than 10 neighbors sided with Noone during the testimony portion of the public hearing. Thirteen individuals spoke in support of Modern Barre, with approximately 110 letters written in support of the studio to the Land Use Committee.

Noone’s attorney denied the studio’s allegations of harassment, noting that it is to be expected that neighbors would be concerned and inclined to document a major development that is affecting public safety near their residence.

“My client’s only hope is that the property is used in a reasonable and responsible way that is consistent with its size and location in a residential neighborhood,” Parker said. “The goal here is to find a reasonable balance in terms of the use of the site, and to determine the proper treatment of public safety in relation to the site.”

The zoning permit was not awarded on Tuesday, as the Aldermanic Land Use Committee asked that it be given more time to review the petition. Although the committee expressed displeasure with the landlord regarding the opening of an additional business on the property, it will work in the interim to determine conditions under which Modern Barre will continue operations. The hearing will continue on Nov. 17. Both Modern Barre and Noone have express interest in reaching a reasonable compromise quickly as possible.

“Our sincere hope is that everyone can move forward with their lives and businesses,” Farmelant said. “This has gone on for months now, and we hope the permit will be sorted out appropriately as it should have been when we started the business.”

newton Noone
Another Cold Weekend On The Charles For Annual Regatta
Anthology Television: The Bridge Between The Gold And The Silver Age