Home » Metzdorf Tagged for Seven Runs as BC Falls to Clemson 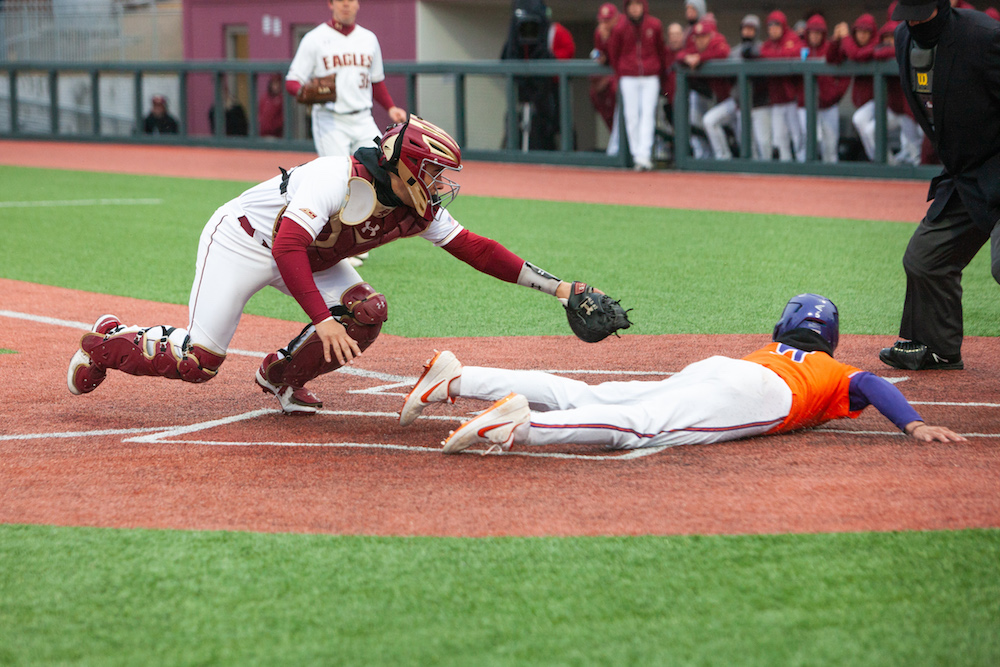 Metzdorf Tagged for Seven Runs as BC Falls to Clemson

The southpaw, who entered the matchup with three starts under his belt and a sparkling 1.06 ERA—top among the Eagles’ weekend rotation—was tagged for seven runs in 7 1/3 innings in BC’s 8-1 loss to Clemson.

Metzdorf put up a scoreless first and needed just eight pitches to do so, but he started to leave pitches up and the Tigers (17-5, 5-2 Atlantic Coast), sixth in the conference in scoring, capitalized. Two singles and a double from Bo Majkowski brought in the game’s first run, then after back-to-back strikeouts, James Parker brought in two more with a double to right-center.

The Eagles (11-10, 2-5 Atlantic Coast), meanwhile, were left guessing for the most part against Clemson freshman righthander Davis Sharpe. Mixing a low-90s fastball with good offspeed, Sharpe was largely unhittable for stretches of the game, going seven innings in his sixth start of the year. He briefly ran into trouble in the second—Jake Alu doubled and Jack Cunningham singled to open the frame—but escaped by inducing consecutive groundouts, the first of which was a double play.

Sharpe, who struck out six, set down eight of the next nine batters he faced after the second inning threat. In his last inning of work, Cunningham singled with one out and stole second, but Sharpe—working with a four-run lead—settled in and struck out Eagles’ catcher Gian Martellini before ending his night via a lineout from Cody Morissette.

In the fifth, Clemson added an insurance run, thanks to some clever baserunning. Metzdorf gave up a pair of two-out singles to Sam Hall and Logan Davidson, the Tigers’ two most dangerous hitters, then an ill-fated pickoff attempt resulted in a double steal in which Hall waltzed home to put his team up, 4-0.

Metzdorf worked around some command struggles in the sixth—he walked the leadoff batter and hit another—then won a pair of eight-pitch battles in the seventh to get a 1-2-3 inning. The eighth, however, which started with the lefty throwing his 99th pitch, quickly unraveled. He gave up a leadoff double to Grayson Byrd, walked Bryar Hawkins, and hit Majowski to load the bases with one out—which was enough for BC head coach Mike Gambino to go to his bullpen.

The Eagles turned to Travis Lane, a hard-throwing freshman who spun two scoreless innings on Wednesday night against Siena, to escape the jam—but he allowed all three inherited runs to score and let in another for good measure. Lane was greeted by consecutive RBI singles from Bryce Teodosio and Michael Greene, then walked both Hall and Davidson with the bases loaded to push the Tigers’ lead to eight.

Sharpe gave way to Luke Sommerfield, a little-used reliever out of the Tigers’ pen, and he spun a 1-2-3 eighth before coughing up BC’s lone run in the ninth. Pinch hitter Joe Suozzi led off the ninth with a single, and would eventually score three batters later on a sacrifice fly from Martellini. Morissette would go down swinging to end any hopes of a rally with a whimper, though, and BC’s losing streak in conference play slid to three—with each game decided by seven-plus runs.

Ultimately, Metzdorf likely inspired confidence with his efficient seventh inning, but the eighth inning was a disappointing end to a gutsy night. The Eagles needed him to work deep into the game after a pair of midweek contests and the weekend prior that gutted their bullpen, and he was able to do it at the expense of his numbers. Still, through four starts, Metzdorf has 21 strikeouts in 24 2/3 innings pitched and is holding opponents to a .205 batting average against. Whether that will last as the perilous conference slate continues is to be determined, but an early 3.33 ERA is a far cry from his 5.74 mark a season ago.

Yet the loss still stings, as an early three-run lead felt insurmountable after BC squandered a golden opportunity to answer in the bottom of the frame. Sharpe kept the Eagles on their toes throughout, and a team that sparked confidence early in the season with their ability to pile up runs has been held to three or fewer runs in three of their last four games. Players like Sal Frelick have started to come back down to earth—he is on an 0-for-10 streak and sat out against Siena—and it’s translated to a tough stretch for BC. The Eagles have plenty of upside, but the pitching isn’t at the point where the offense can afford to have off nights, as evidenced by decisive losses to the likes of Clemson and Wake Forest.