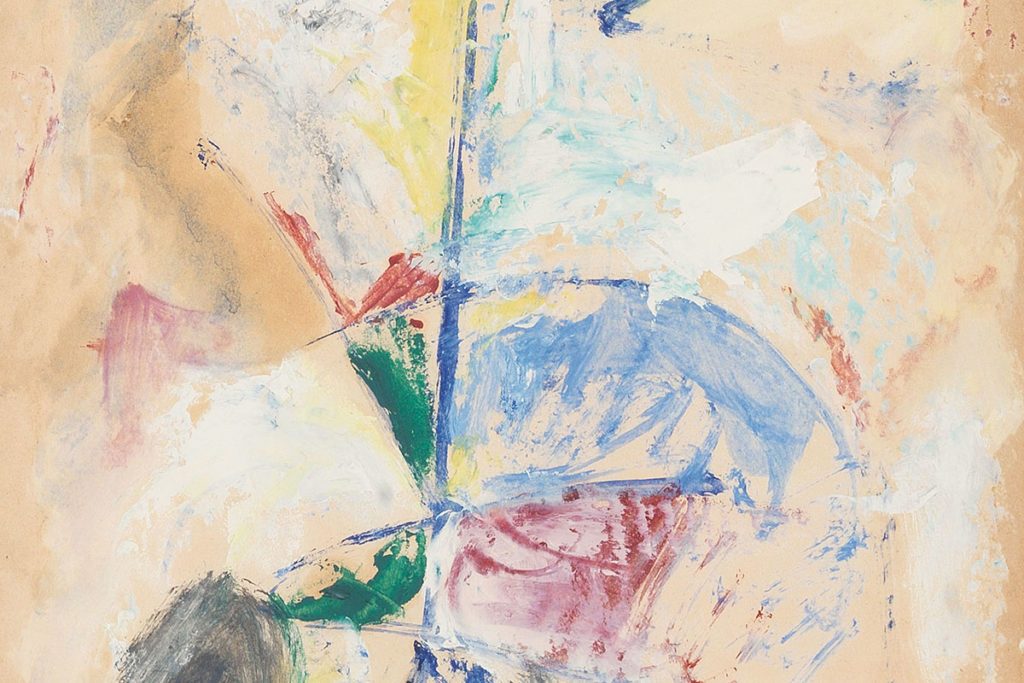 Boston College’s McMullen Museum of Art opened a new exhibit showcasing the works of Spanish artist Esteban Lisa on Sept. 16. Upon entering the exhibit, one may be taken aback by the stark contrast between the dark, rigidly geometric paintings that border the entrance, and the light, abstract works that explode off of the back wall. The name of the exhibit, abstract cabinet, is derived from the concept of using modestly sized spaces to display small pieces of artwork in order to create an intimate experience for viewers. The layout of the exhibit thoughtfully takes gallery goers through the chronology of Lisa’s colorful life and art.

The first collection of paintings, titled “Composiciones (Compositions),” includes Esteban Lisa’s paintings dating from 1930 to 1953 and is divided into two parts: 1930 to 1940 and 1940 to 1953. All of the works featured in “Compositions” are oil on cardboard paintings, many of which contain artwork on both sides of the cardboard, highlighting Lisa’s resourcefulness. The 1930 to 1940 display of “Compositions” is characterized by defined geometric shapes filled with darker tones of brown, blue, and green. Lisa, like Picasso and other artists of his time, uses lines and varying shades of similar hues to create the appearance of shapes within shapes. Some of the paintings depict recognizable landscapes, like “Paisaje Urbano (Urban Landscape),” while others contain subject matter that is not immediately obvious.

The theme of geometric images continues in the later works of “Compositions,” but Lisa incorporates “organic” elements. While Lisa maintains distinguishable shapes in these paintings, he adds a certain fluidity and roundness to the figures, both in their shape and in the use of playful lines and dots as decoration. The contrast of the geometric and organic represents the tension between reason and emotion in this collection, a theme that is discussed at length in his 1955 book, Kant, Einstein y Picasso, which is also on display in the exhibition.

“Juego con lineas y colores (Playing with lines and colors)” is also broken into two installments: 1950-1963 and 1963-1977. Lighter colors, undefined figures, and white space create a livelier appearance. This collection includes oil on paper and oil on cardboard, and a few of the paintings are hung without a glass overlay to reveal the flatness of the paint Lisa used. A few of the pieces in this collection also include small inscriptions, such as “small black cat, small bird” on the medium to indicate the subject matter of the work. White paint dances throughout the works, intermingling with bright shades of red and blue to create a happy and carefree visual experience. Perhaps the lack of definition of shape in this collection adds to the suggestion of feeling and expresses the slow deterioration of reason, freeing the artist to delve into emotion in his art. Given Lisa’s knowledge of philosophy, one must consider the significance of the absence of reason in his later paintings.

Breaking from “Juego con lineas y colores,” Esteban Lisa created Actos Espaciales (Spatial Acts) between 1954 and 1957. The pastel on paper collection appears more minimalist than the other works of Lisa. These pieces are distinguished by large amounts of open space and lightly shaded areas. Additionally, Lisa varies the width of many styles of lines to create fluidity and continuity throughout the small collection. The pastel on paper works all feature carelessly-drawn borders to contain the varying lines, shapes and colors. The description the museum provides for the collection suggests automatism, or “subconscious impulses [that] direct line, color and structure,” may have been employed to create these particular pieces.

Despite Esteban Lisa’s relatively humble life, Lisa is considered a pioneer of abstract art and his works are held in high regard throughout the world. A video about the vibrant life and legacy of Esteban Lisa plays in the room adjacent to the exhibition. McMullen curated the exhibition from Museum Fundacion Juan March, the Museum of Fine Arts, Boston, and private collections, granting the BC community the opportunity to bring many of these pieces to New England for the first time.