An informal gathering of dance groups drew throngs of students to the lawn of 2150 Commonwealth Ave. Thursday evening, as seven teams shared their planned routines for ALC Showdown. The dance competition was scheduled to be held on April 4, but will not happen due to the cancelation of in-person classes and order for students to return home by Sunday.

In response to yesterday’s announcement, hip-hop group Synergy organized the impromptu show. It originally planned to hold the gathering in one of the dance studios on Brighton Campus, but they were unexpectedly locked, which led to the groups performing on the lawn of 2150 Commonwealth Ave. instead, according to Synergy member Sunny Lee, CSOM ’22.

An audience of dancers and their close friends quickly swelled over the course of the evening as curious passersby joined the celebration and students found out about the event through social media and word of mouth. Full Swing, Dance Organization of Boston College, UPrising, On Tap, Fuego, Phaymus, and Synergy all showed up to perform.

A speaker stationed in a fourth-floor apartment blasted the groups’ routine soundtracks through open windows. Some audience members settled on the grassy steps of the lawn, while others watched from the sidewalk. Despite a few technical hiccups and adjustments, the evening came together remarkably smoothly.

“We didn’t have transitions, and we didn’t have a full soundtrack until now,” said Lee. “We always practice each of the pieces separately, and that’s why there was a lot of confusion, like, ‘Which piece is next, when does it start?’ because the music was really low and we couldn’t really hear it.”

When hip-hop group Phaymus performed, a dancer could be heard shouting out the counts for the routine.

Latin dance group Fuego had not yet completed its Showdown routine, so to fill the six-minute window given to each group for the competition, it performed a fragment of its Showdown routine and tacked on previous dances. The female dancers, who usually perform effortlessly in high heels, went shoeless on the muddy makeshift dance floor.

Freshman Fuego member Alex Herrera, MCAS ’23, was surprised by the size of the crowd that showed up to watch the groups perform.

“I don’t know how this many people found out, honestly,” she said. “We’re just happy to be able to dance one more time together.”

Other groups, such as On Tap, were able to present their routines in their entirety, albeit with pared down costumes.

While Lee said the event was originally limited to the Boston College dance community as a way for the groups to share what they had prepared so far with each other, the audience eventually included even those who had no ties with any of the groups. Students milled around the outskirts of the lawn, several holding cans of beer and White Claws.

Some students said they found out about the showcase through social media, or simply heard the loud music and walked over to see what was going on.

Meredith Brodsky, MCAS ’20, said that neither she nor the two friends she was with knew about the event beforehand.

“We heard the yelling from our dorm and then we saw on Snapchat that everyone was here,” Brodsky said. 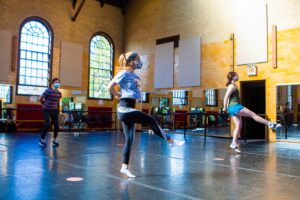 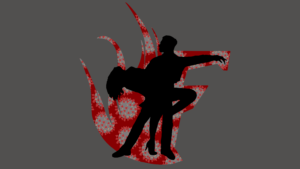